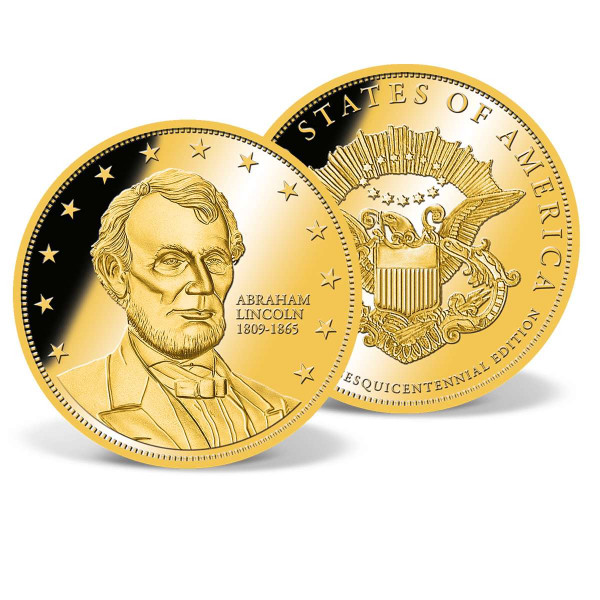 Born in 1809 near the humble town of Hodgevile, Kentucky, Abraham Lincoln grew up in a hard-working farm family. Lincoln excelled in school from an early age and had a voracious love for both reading and woodcutting, for which he became locally well-known. His interest in politics was fueled by his heart for people and fierce advocacy for liberty and the pursuit of happiness. Lincoln eventuallystudied law and passed the bar exam with no formal collegiate education in 1836, whereafter he practiced law in the Prarie region.

When Abraham Lincoln was elected President in 1861, the dark clouds of the Civil War were already gathering. After desperate attempts at avoiding conflict had failed and blood had already begun to spill, "Honest Abe" was forced to become the most active leader in American history-assuming the role of Commander-in-Chief during America's bleakest and bloodiest period. Lincoln led the nation with integrity and determination, ultimately securing victory in the North and bringing an end to slavery. Assassinated just six days after the end of the Civil War, Lincoln is remembered as our greatest President.

Meticulously designed by American Mint -in conjunction with The National Civil War Museum - for the upcoming Sesquicentennial of the Civil War, this exquisite coin features Abraham Lincoln on the obverse and is luxuriously layered in 24k gold.

The Abraham Lincoln Commemorative Coin Can Be Yours at an Affordable Price This beautiful coin captures Lincoln's legacy of unity and honesty in an intricately detailed engraving of the late president's profile and the thirteen stars of the thirteen original colonies lining the coin's circumference. Sold as a single coin, the Abraham Lincoln Commemorative Coin shines bright in any collector's display. Take advantage of our fantastic discount and claim this gold-layered commemorative coin today.

The Abraham Lincoln Commemorative Coin symbolizes the strengthand character of its namesake president who helped build our great nation. This beautiful coin features stunning engravings on both sides with a copper core and a gold-layered finish.

Purchase the Lincoln Commemorative Gold Coin Today You can make the Abraham Lincoln Commemorative Coin your own today. Any orders over $100 are eligible for interest-free payment plans, and any orders over $150 are eligible for free shipping. Our friendly customer representatives are available 8 a.m. to 8 p.m. Monday through Friday to answer any questions about our coins and purchasing options -- just call 1-877-807-MINT.