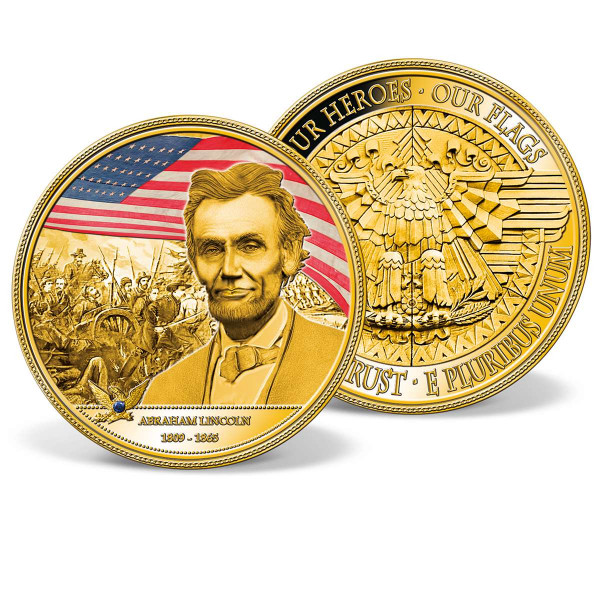 Includes a free preview of future issues in the collection Our Heroes - Our Flags. For more information, please refer to the Satisfaction Guarantee tab below. If you do not wish to preview future issues in the collection, you may purchase the single item using the 'Individual Item Only' tab at right.
Price $139.95 * $19.95
Total: $19.95
You save $120.00
Total: $139.95
Tweet
Share
Description Satisfaction Guarantee
Description
When Abraham Lincoln was elected President in 1861, the dark clouds of the Civil War were... more
Close menu
Abraham Lincoln Colossal Commemorative Coin

When Abraham Lincoln was elected President in 1861, the dark clouds of the Civil War were already gathering. After desperate attempts at avoiding conflict had failed and blood had already begun tospill, "Honest Abe" was forced to become the most active Commanderin- Chief in American history. Even though he had no experience in battle or any military training, Lincoln began studying tactics andproved to be a natural strategist and a better master of military strategy than his generals.

The Civil War pitted American against American and, in some cases, brother against brother. Four brutal years of conflict - marked by fierce battles, incredible acts of bravery, and great leadership - ended in 1865 when the Confederacy surrendered to Union forces at Appomattox. Through it all,Lincoln led the nation with integrity and determination - emancipating the slaves, securing victory for the North, and re-unifying the nation.

Today, he is widely regarded as our nation's greatest President.

The AMERICAN MINT EXCLUSIVE Abraham Lincoln colossal commemorative coin is a 24k gold-layered tribute to our nation's greatest President. A colossal 2.75" in diameter, thislimited-edition 24k gold-layered coin is accented with a full-color American flag and inlaid with a genuine deep-blue SWAROVSKI® ELEMENT.