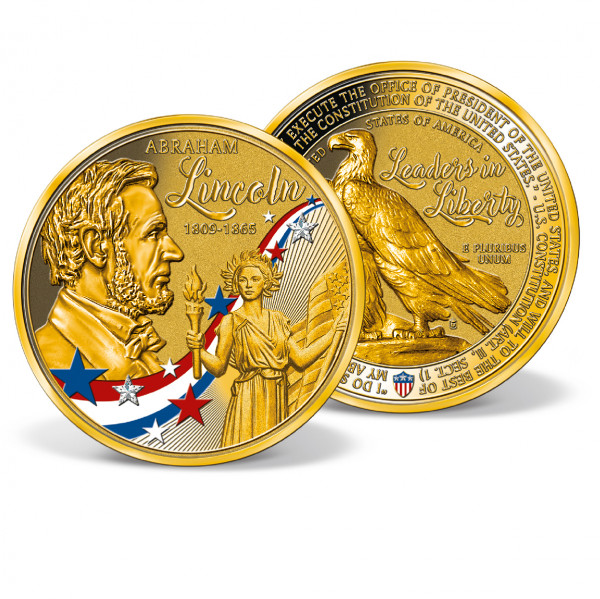 Born in 1809 in a humble Kentucky log cabin, Abraham Lincoln grew up on a farm before his focus turned to wood-cutting and his own education. Although he underwent no formal collegiate education, Lincoln taught himself law and passed the bar exam, quickly gaining his reputation as a well-known "Prairie Lawyer." His interest in civil government eventually led him to run for president during a time when the role was tumultuous.

When Lincoln became President in 1861, the dark clouds of the Civil War were already gathering. After desperate attempts at avoiding conflict had failed andthe blood began to spill, "Honest Abe" was forced to become the most active leader in American history - assuming the role of Commander-in-Chief during America's bleakest and bloodiest period. Throughit all, Lincoln led the nation with integrity and determination, emancipating the slaves and ultimately securing victory in the North. Tragically, he was assassinated just six days after the end of the Civil War. Today - 150 years after his death - Lincoln is widely regarded as the greatest President in our nation's history.

Available exclusively from American Mint, the Abraham Lincoln- Leaders in Liberty Colossal Coin is minted to the highest quality "Proof" standard and luxuriously layered in 24k gold. This exquisite tribute also features highly detailed engravings of President Lincoln and Lady Liberty, along with stars and stripes in patriotic red, white, and blue!

Cherish Your Own Abraham Lincoln - Leaders in Liberty Colossal Coin Our Abraham Lincoln- Leaders in Liberty Colossal Coin is a wonderful addition to any coin collection. You can own this spectacular coin with a one-time secure purchase or through our special Collect & Save option to receive future issues of this collection. Orders over $100 qualify for interest-free payments, and orders over $150 come with free shipping.

Order Your Abraham Lincoln Colossal Coin Today If you're looking for the perfect gift for a coin collector or historian in your life or simply want to expand your own collection, take advantage of this incredible offer while it lasts! Simply make your purchase via our secure online payment system or through PayPal, and your beautiful coin set will be sent right to your door.

Let the experts at American Mint handle any questions you may have about our Abraham Lincoln Commemorative Coin Set or any other commemorative U.S. coins. Call us any weekday between 8 a.m. and 8 p.m. at 1-877-801-MINT!