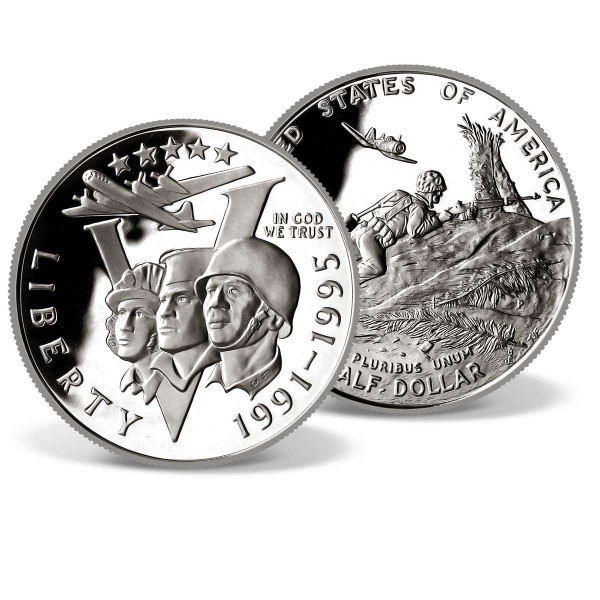 Includes a free preview of future issues in the collection Military Commem. Coins. For more information, please refer to the Satisfaction Guarantee tab below. If you do not wish to preview future issues in the collection, you may purchase the single item using the 'Individual Item Only' tab at right.
Total: $44.95
Total: $44.95
Tweet
Share
Description Satisfaction Guarantee
Description
The United States' involvement in the Second World War lasted from 1941-1945. While the combined... more
Close menu
50th Anniversary World War II Half Dollar Coin

The United States' involvement in the Second World War lasted from 1941-1945. While the combined efforts of the U.S. and its allies prevented the Axis forces of Germany, Italy, and Japan from achieving world dominance, it came with a high price. More than 418,000 Americans lost their lives on the battlefields of Europe, North Africa, and Asia during those four tumultuous years.

Owninga World War II 50th anniversary commemorative half dollar U.S. coin is one way you can pay tribute to the men and women who fought so bravely to preserve our freedom.

This coin is unique to other U.S. coins becausethe dates on the coin represent the anniversary years and not the year of mintage. The World War II 50th Anniversary coin honors the men and women who served our country during a time of war, both inthe army lines and on the home front. Serving as a tribute to the brave, courageous heroes who selflessly gave their lives for others, this half dollar anniversary coin commemorates the sacrifices ofthese soldiers and celebrates our freedoms.

The World War II 50th Anniversary Half Dollar Provides Excellent Value for Your Money Purchase your WW2 50th-anniversary commemorative coin at an amazingly low online price. You can also get free shipping and handling if your order totals at least $150. If you'd like the convenience of paying for your coins over time, you can makeinterest-free monthly installments if you spend more than $100. Our friendly, knowledgeable customer service representatives will be happy to answer your questions and explain all of your options. Feel free to call us at 1-877-807-MINT Monday through Friday from 8 a.m. to 8 p.m. EST.

Order Your WW2 50th Anniversary Coins Right Now! Purchasing coins online from American Mintis fast, easy, and secure  place your order today! While you're here, be sure to check out our entire collection of commemorative coins, Bowie and pocket knives, fine jewelry, and other outstanding collectibles.