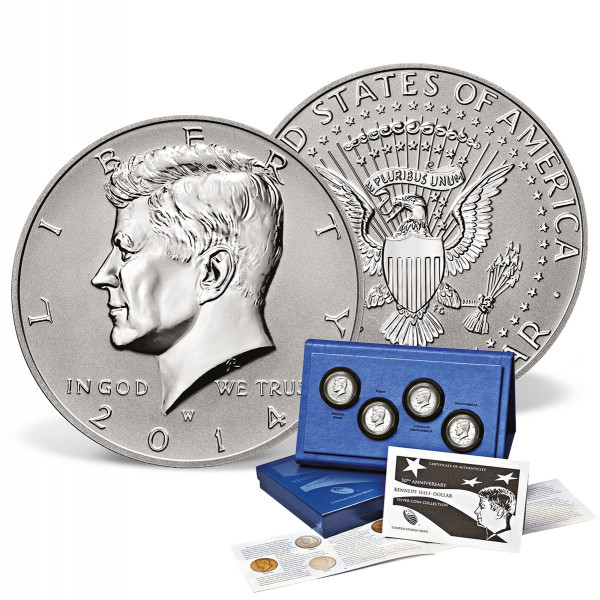 Born in 1917, John F. Kennedy was the second son in a prominent Massachusetts family. During his childhood and youth, John suffered frequent serious illnesses. Nevertheless, he strove to make his own way and seemed destined for greatness. He enrolled in Harvard in 1940 and, during his senior year, wrote his thesis on Great Britain's lack of readiness for war with Germany which went on to be a best-selling book. When America was pulled into World War II, Kennedy joined the U.S. Navy and was sent to the South Pacific where he was injured when the patrol torpedo boat he commanded was rammed byan enemy warship. Despite his injuries, Kennedy guided the surviving crew members to safety and was awarded the Navy and Marine Corps Medal and a Purple Heart for his heroism.

Following his military service, Kennedy was elected to Congress, first serving six years in the House of Representatives (1947-1953) and then seven years in the U.S. Senate (1953-1960). In 1960, he became the Democratic nomination for President. Kennedy won the election and in 1961 was inaugurated as the 35th President of the United States. At 43, Kennedy was the youngest man ever to be elected President andAmerica quickly fell in love with his youthful charm, good looks, and quick wit. But it was his strong will and political savvy that led an entire nation through trying times. The threat of nuclear war loomed large, leading to the Cuban Missile Crisis, and at home, the search for equality put the Civil Rights Movement on the forefront of American politics. Throughout it all, Kennedy led with distinction and pushed the nation to even greater heights, leading to its greatest achievement of landing a man on the moon.

His brilliant political career was cut short by an assassin's bullet on Friday, November 22, 1963, in Dallas, Texas. It is difficult for anyone who was not a witness to those sad days to fully comprehend the sense of loss which overtook the nation. Now, on what would have been his 100th birthday, JFK is remembered as one of the most beloved and revered men ever to hold the Office of President of the United States of America.

Cherish Your Own Kennedy Silver Half Dollar Set The John F. Kennedy profile you see in this beautiful 50th Anniversary Kennedy Half Dollar Silver Coin was introduced in 1964, one year after the 35th U.S. president's assassination. Celebrating JFK's life and legacy on the 100th anniversary of his birth, this silver proof coin collection is 100% authentic and features a total weight of 1.44 troy ounces. Each set youreceive comes in original packaging and contains official documentation.

Purchase the 50th Anniversary Kennedy Half Dollar Collection You can own the John F. Kennedy half dollarsilver coin collection to cherish for generations. This beautiful set of four 90% silver half dollar coins can be yours when you contact our friendly customer representatives at 1-877-807-MINT. Orders over $100 are eligible for interest-free payments, and orders over $150 are eligible for free shipping right to your door.