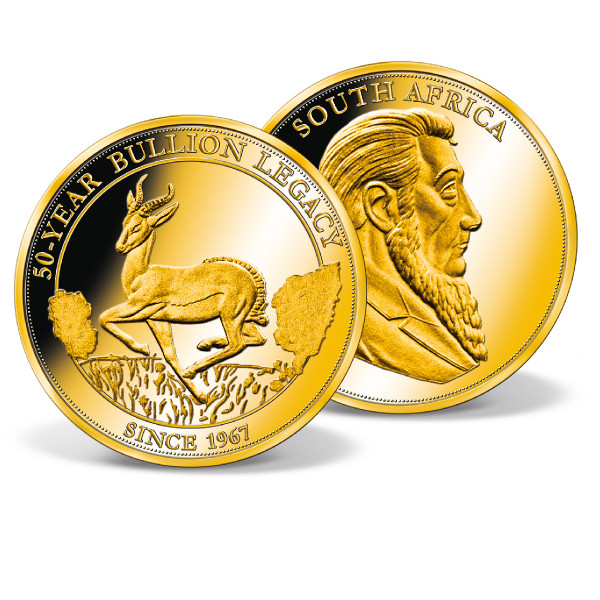 Includes a free preview of future issues in the collection Internat.Coin Replikas in Gold. For more information, please refer to the Satisfaction Guarantee tab below. If you do not wish to preview future issues in the collection, you may purchase the single item using the 'Individual Item Only' tab at right.
Price $169.95 * $29.95
Total: $29.95
You save $140.00
Total: $169.95
Tweet
Share
Description Satisfaction Guarantee
Description
First produced by the South African Mint in 1967, the Krugerrand quickly became the most popular... more
Close menu
50 Years Investment Strike Commemorative Gold Coin

First produced by the South African Mint in 1967, the Krugerrand quickly became the most popular gold bullion coin in the world. By the 1980s, Krugerrands dominated the gold coin market, and theirworld-wide success inspired other countries to produce their own bullion coins, including the Canadian Gold Maple Leaf, the Chinese Gold Panda, and the American Gold Eagle.

For more than 50years, the Krugerrand has been setting the standard for bullion and its immense popularity and stability has solidified its reputation as the King of Gold Bullion Coins.

Presenting the 50 Years Investment Strike Solid Gold Coin To celebrate the fantastic history of the South African Krugerrand, American Mint is proud to present the 50th Anniversary Commemorative Gold Coin.Struck in .585 solid gold, this stunning tribute features the iconic springbok antelope depicted on the obverse of the real bullion coin, as well as the portrait of former South African president PaulKruger on the reverse.

Minted to the highest quality "Proof" standard, this 14k solid gold coin will make a striking addition to any home collection. Act now before supplies of the 50 Years Investment Strike gold coin are gone!