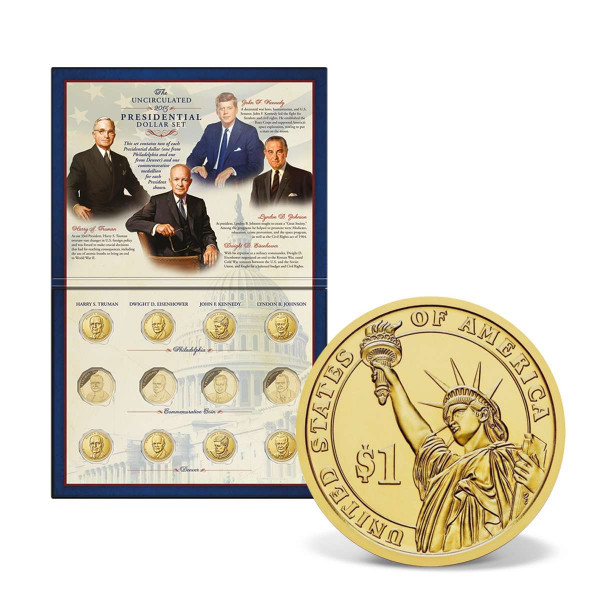 In 2005, Congress commissioned the U.S. Mint to create a series of coins honoring the U.S. Presidents. Beginning in 2007, the coins were released in order starting with George Washington, with fourcoins introduced every year. Each coin features a new presidential portrait on the obverse and has a common reverse that celebrates the Statue of Liberty.

Purchase a Book of 2015 Presidential Dollar Coins From American Mint In 2015 the coins honoring Harry S. Truman, Dwight D. Eisenhower, John F. Kennedy, and Lyndon B. Johnson were added to the series. The 2015 Presidential Dollar Set has two of each presidential dollar released in 2015  one from the Philadelphia Mint and one from the Denver Mint presented in an AMERICAN MINT EXCLUSIVE collector's book. Each coin is "BrilliantUncirculated" condition and 26.5 mm in diameter (1") and is encased in a protective shell.

Order Your 2015 Presidential Coin Proof Set at a Fantastic Price! We're offering these beautiful 2015 presidential dollar coins for sale at a deeply discounted online price. Combine the set with other items in our collection and get free shipping and handling, which applies to all orders of at least $150. You can also make interest-free monthly installment payments if you spend more than $100.

Place your 2015 presidential coin set order quickly and securely here at our e-commerce site. Don't hesitate to call us at 1-877-807-MINT from 8 a.m. to 8 p.m. EST Monday through Friday if you have questions or need assistance.