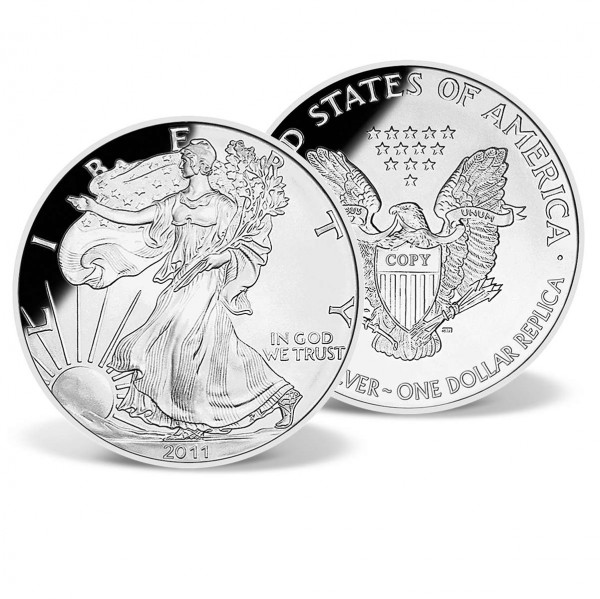 Includes a free preview of future issues in the collection The Birth of our Nation. For more information, please refer to the Satisfaction Guarantee tab below. If you do not wish to preview future issues in the collection, you may purchase the single item using the 'Individual Item Only' tab at right.
Total: $597.00
Total: $597.00
Tweet
Share
Description Satisfaction Guarantee
Description
Since 1986, the United States has minted one-dollar silver coins called American Silver Eagles,... more
Close menu
2011 Half-Pound Silver Eagle Replica Coin

Since 1986, the United States has minted one-dollar silver coins called American Silver Eagles, each containing a minimum of one troy ounce of 99.9% pure silver. The original legal tender coin hasa face value of one dollar, but its true value is much higher based on the recently rising price of its silver content. Silver Eagles are tangible investments in silver whose beauty and artistry you can hold in the palm of your hand. Often considered one of the most beautiful coins ever minted, the Silver Eagle's design is based on A.A. Weinman's "Walking Liberty," which was first introduced on the 1917 silver halfdollar. On the reverse, an American Bald Eagle and shield represent America's strength and pride. With nearly 150 million sold since 1986, American Silver Eagle Bullion Coins have become the world's best-selling silver coins.

Meticulously reproduced from A.A. Weinman's exquisite "Walking Liberty" design, the 2011 Half-Pound Silver Eagle Replica Coin is eight times the size of the original and contains one half-pound of .999 pure silver! Minted to the highest quality "Proof" standard, this AMERICAN MINT EXCLUSIVE replica is strictly limited to only 2,011 pieces worldwide. Your replica coin comes in its own protective capsule to preserve it for future generations and includes a Certificate of Authenticity.