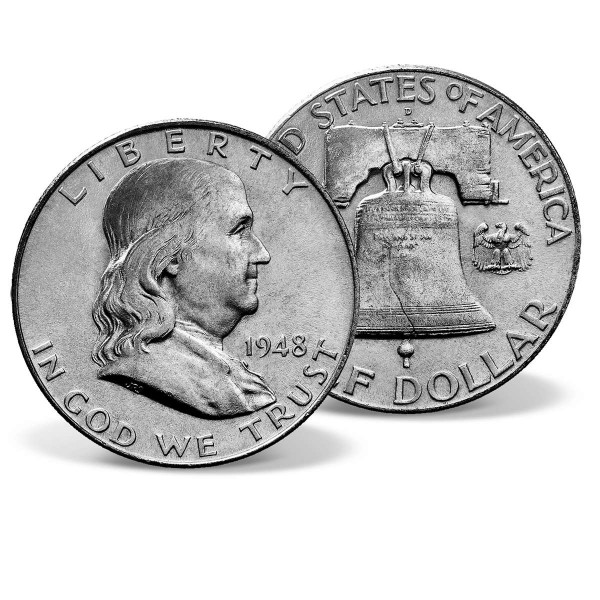 Includes a free preview of future issues in the collection 1948-1963 Franklin 1/2 Dollars. For more information, please refer to the Satisfaction Guarantee tab below. If you do not wish to preview future issues in the collection, you may purchase the single item using the 'Individual Item Only' tab at right.
Price $49.95 * $29.95
Total: $29.95
You save $20.00
Total: $49.95
Tweet
Share
Description Satisfaction Guarantee
Description
Introduced in 1948, the Franklin Half Dollar holds a very special place in the history of the... more
Close menu
1948 Franklin Silver Half Dollar

Introduced in 1948, the Franklin Half Dollar holds a very special place in the history of the U.S. Mint. This silver half dollar marked the first time in the history of American coinage that a person other than a President was featured on a coin. The final circulating coin to make the switch from the allegorical Liberty figure to a portrait of an actual person, the Franklin Half Dollar was created to honor Benjamin Franklin not only for his role as a founding father, but for his contributions as a writer, printer, inventor and scientist. Designed by the Mint's Chief Engraver, John R. Sinnock, the Franklin Half Dollar was also the first coin to show the Liberty Bell complete with its crack -- a feature that was left off previous coin images because critics thought it depicted weakness asa nation.

Composed of 90% silver and 10% copper, these coins were the last half dollars to be produced with .900 pure silver for their entire run. The series concluded prematurely in 1963following the assassination of President John F. Kennedy. By law, circulating coin designs were required to be used for at least 25 years before they could be changed, but Congress overruled the existing law and a new half dollar memorializing Kennedy was introduced in 1964.

A coin of many firsts, the 1948 Franklin Half Dollar is one of the most treasured half dollars ever minted, and unfortunately they are becoming more and more difficult to find. Minted in solid .900 pure silver, this coin is from the first year of production, the most coveted of all Franklin Half Dollars. Each coin comes with a Certificate of Authenticity and includes American Mint's 100% Satisfaction Guarantee.