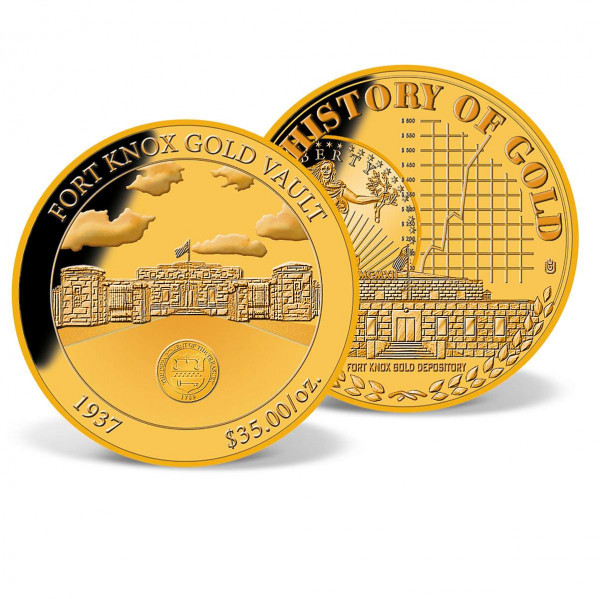 Includes a free preview of future issues in the collection U.S. History of Gold. For more information, please refer to the Satisfaction Guarantee tab below. If you do not wish to preview future issues in the collection, you may purchase the single item using the 'Individual Item Only' tab at right.
Price $79.95 * $19.95
Total: $19.95
You save $60.00
Total: $79.95
Tweet
Share
Description Satisfaction Guarantee
Description
Deep in the ground below a U.S. Army post in Kentucky sits the most famous gold vault in... more
Close menu
1937 Fort Knox Gold Vault Commemorative Coin

Deep in the ground below a U.S. Army post in Kentucky sits the most famous gold vault in history: Fort Knox. Constructed in 1936 with walls of heavy granite and a blast-proof door weighing more than 20 tons, Fort Knox was designed to securely house America's official gold reserves, as well as items of great importance occasionally entrusted to the U.S. government such as original copies of theDeclaration of Independence and U.S. Constitution, the Magna Carta, and European crown jewels.

All-told, the Depository is protected by its own police force plus over 30,000 soldiers with associated tanks, armored personnel carriers, attack helicopters, and artillery; and no single person is entrusted with the entire combination to the vault.

Specially minted to commemorate the80th Anniversary of the United States Bullion Depository at Fort Knox, this AMERICAN MINT EXCLUSIVE tribute is layered in brilliant 24k gold and features a highly detailed rendition of the world's most famous gold vault on the obverse. The year the depository was opened - 1937 - and the price of gold at the time -$35.00/oz. - is engraved along the bottom of the coin. This stunning tribute comes in its own protective capsule to preserve it for future generations.