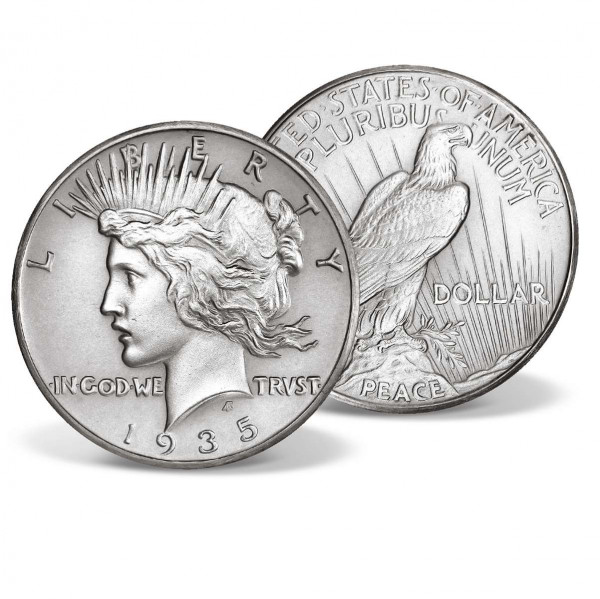 Includes a free preview of future issues in the collection 1921 - 1935 Peace Dollars. For more information, please refer to the Satisfaction Guarantee tab below. If you do not wish to preview future issues in the collection, you may purchase the single item using the 'Individual Item Only' tab at right.
Price $129.95 * $69.95
Total: $69.95
You save $60.00
Total: $129.95
Tweet
Share
Description Satisfaction Guarantee
Description
The Peace Dollar was minted following World War I, at a time when everyone longed for a return... more
Close menu
1935 Silver Peace Dollar

The Peace Dollar was minted following World War I, at a time when everyone longed for a return to tranquility in their daily lives and hope for the future. Created to commemorate the end of the "Great War," the coin's design featured a youthful Lady Liberty wearing a radiant crown. On the reverse was a powerful eagle, grasping olive branches and gazing toward a sunrise, symbolizing the dawn ofa new era of peace.

First produced from 1921 through 1928 - then again from 1934 to 1935 - this beloved coin became an iconic symbol of America's commitment to peace and liberty. Sadly, theend of the Peace Dollar series in 1935 foreshadowed events yet to come; within four years, the world was once again engulfed in war.

Minted in 90% pure silver, this coin is considered the last "true" American silver dollar and is highly valued for its silver content as well as its historical and numismatic significance. American Mint has been able to acquire a limited supply of these historic coins.