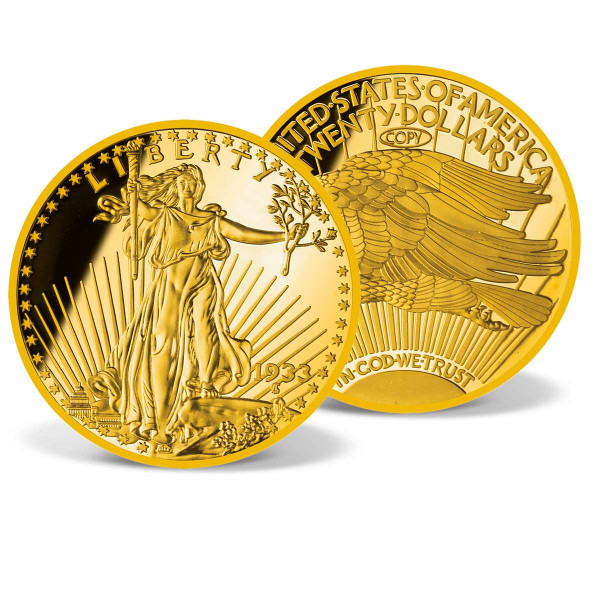 Includes a free preview of future issues in the collection Gold Dream Replica Collection. For more information, please refer to the Satisfaction Guarantee tab below. If you do not wish to preview future issues in the collection, you may purchase the single item using the 'Individual Item Only' tab at right.
Price $129.95 * $19.95
Total: $19.95
You save $110.00
Total: $129.95
Tweet
Share
Description Satisfaction Guarantee
Description
In 1907, President Theodore Roosevelt commissioned famed sculptor Augustus Saint-Gaudens to... more
Close menu
1933 Giant Gold Double Eagle Proof Replica

In 1907, President Theodore Roosevelt commissioned famed sculptor Augustus Saint-Gaudens to redesign the Gold Double Eagle coin. The resulting masterpiece featured Lady Liberty striding toward theviewer into the dawn of a new day and has long been considered the most beautiful coin ever created. Twenty-five years later, as America found itself in the grip of the Great Depression, President Franklin D. Roosevelt, made private ownership of gold illegal and all 1933 double eagles were ordered to be melted down into plain gold bars.

However, as many as 20 coins escaped this fate: twowere given to the Smithsonian for exhibit, and a handful were secreted away by the Mint's chief cashier. One by one, the Secret Service was able to locate - and confiscate - most of the coins. One missing coin ended up in the collection of Egypt's King Farouk, but political considerations kept agents from confiscating it. After Farouk was removed from power, the coin disappeared until 1996 when it was seized by federal agents and stored away in a vault in the World Trade Center. In a miraculous twist of fate, the coin was moved from the World Trade Center just before the terrorist attacks ofSeptember 11. A year later, the single surviving 1933 Gold Double Eagle was sold at auction for an astonishing 7.59 million dollars, making it the most expensive gold coin in history.

As atribute to the MASSIVE impact of the U.S. Mint's BIGGEST numismatic success, the master artisans at American Mint have created the 1933 Giant Gold Double Eagle Proof Replica. Our COLOSSAL reproductionhas a weight of 110 grams and a diameter of 70 millimeters, enlarging Saint-Gaudens' unforgettable design to twice the original size!