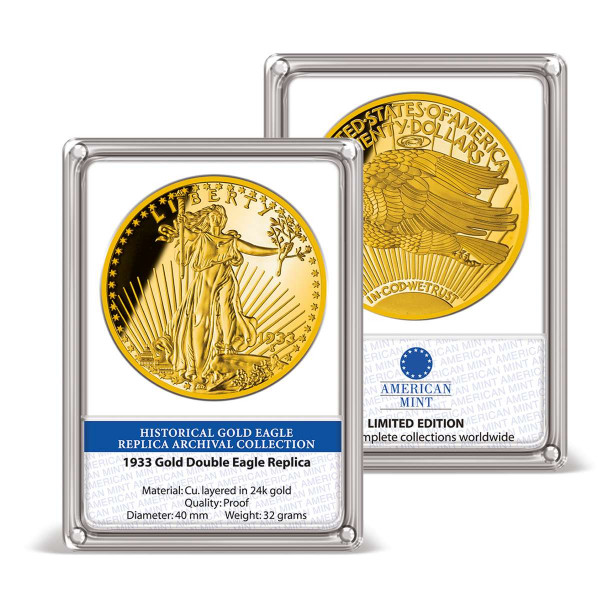 Includes a free preview of future issues in the collection Gold Eagle Arch. Collection +. For more information, please refer to the Satisfaction Guarantee tab below. If you do not wish to preview future issues in the collection, you may purchase the single item using the 'Individual Item Only' tab at right.
Price $79.95 * $19.95
Total: $19.95
You save $60.00
Total: $79.95
Tweet
Share
Description Satisfaction Guarantee
Description
The year was 1933. America was already years into the Great Depression, and President Franklin... more
Close menu
1933 Double Eagle Archival Edition Commemorative Coin

The year was 1933. America was already years into the Great Depression, and President Franklin D. Roosevelt was looking for solutions to end the country's ongoing bank crisis. He settled on one, and it would involve asking every American to deliver any gold in their possession to the Federal Reserve. With the issue of Executive Order 6102, the government required citizens to surrender any 1933gold double eagle for melting or face criminal penalties. A year later, private gold ownership was outlawed entirely.

Only a few of the gold double eagle coins managed to escape this fate. Two were spared by the U.S. Mint and donated to the Smithsonian Museum for their collection of rare coins. Another 10 were taken by a Mint employee, leading to an international investigation that lasted for decades and finally saw nine of them returned. The tenth coin fell into the hands of the King of Egypt and didn't make its way back into the United States until 1996 when the Secret Service useda sting operation to recover it.

After that coin sold at auction for a staggering $7.59 Million, achieving the distinction of the most expensive coin ever sold, the world thought it had seen the last 1933 gold double eagle. Then, three years later, in 2005, another 10 more surfaced in a safety deposit box in New York City. Thought to be the final 10 coins in existence, these became of alengthy legal battle, which finally ended with the government winning the rights to the coins and taking possession.

Presenting the American Mint 1933 Gold Double Eagle Replica ArchivalEdition Considered to be the rarest, most notorious, and most valuable coin in the history of currency, it is impossible to find a real 1933 gold double eagle to add to your collection. Withthe American Mint 1933 Double Eagle Archival Edition commemorative coin, we have made it easy to get an authorized replica so you can own a piece of history.

Our 1933 Double Eagle ArchivalEdition commemorative coin is produced with the same design and dimensions of the original coin and is 100% legal to own. The obverse features a striking image of Liberty as sculpted by Augustus Saint-Gaudens, and the reverse featured an eagle in flight illuminated by rays of sunlight. The year on the coin is 1933.

The American Mint 1933 American Mint 1933 Gold Double Eagle Replica Archival Edition commemorative coin has a copper core, a mirror finish made from luxurious 24k gold. Our 1933 gold double eagle replica is minted to the highest "Proof" quality, and each comes sealed in our attractive NumiShield Archival Case to preserve it.

Order the 1933 Double Eagle Archival Edition Commemorative Coin Today These coins have a rarity of their own, and only 9,999 will ever be produced. To order yours, place a one-time order today, or subscribe to receive other coins in our Gold Eagle Archival Collection. To complete your collection, view the rest of our historic gold-layered coins.