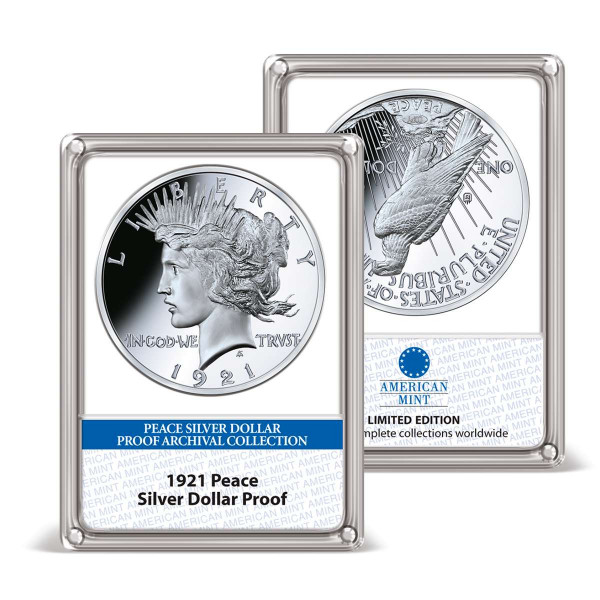 Includes a free preview of future issues in the collection Peace Silver Dollar Proof. For more information, please refer to the Satisfaction Guarantee tab below. If you do not wish to preview future issues in the collection, you may purchase the single item using the 'Individual Item Only' tab at right.
Total: $79.95
Total: $79.95
Tweet
Share
Description Satisfaction Guarantee
Description
In 1918, Congress passed the Pittman Act. It required the government to melt millions of the old... more
Close menu
1921 Peace Silver Dollar Proof Archival Edition

In 1918, Congress passed the Pittman Act. It required the government to melt millions of the old Morgan Dollars in the Treasury vaults, then sell the silver bars to foreign nations. The Act then called for the U.S. Mint to create a new silver dollar to be struck with domestic silver purchased from the powerful mine owners in the West. While the Pittman Act was passed to lift up the flagging silver industry, it created a numismatic masterpiece: the Peace Dollar.

As the guns fell silent across the battle-torn fields of Europe in November 1918, a great yearning swept throughout the United States to commemorate the end of the "Great War," so Congress passed legislation calling for a new coin to mark the new era of peace. A contest was held to decide the new coin's design and renowned sculptor Anthony de Francisci's creation was selected.

The design featured a youthful Lady Liberty wearing a spiked crown - reminiscent of the Statue of Liberty - on the obverse. An Italian immigrant, de Francisci held the statue in the highest regards and used his own wife, Teresa, as the model for the portrait. On the reverse, de Francisci placed an American eagle atop a rock thatis engraved with the word "Peace." The eagle is looking into a rising sun symbolizing the dawning of a new day of tranquility.

The coin was first minted in 1921 and only ran until 1928, whenthe silver purchasing requirements of the Pittman Act had been fulfilled. Since large silver coins had fallen out of favor in place of paper money, it was assumed the Peace Dollar had run its course.But in 1934 and 1935, the coin was once again minted in small quantities as backing for silver certificates. This created some of the most desirable years among collectors of this beloved coin.

Sadly, the end of the Peace Dollar series in 1935 foreshadowed events yet to come; within four years, the world was once again engulfed in war.

Available exclusively from American Mint,this exquisite proof is meticulously reproduced from the first-year-of-issue 1921 Peace Silver Dollar and is minted to the highest quality "Proof" standard. This .999 pure silver-plated replica is presented in its own archival case to preserve it for generations to come.