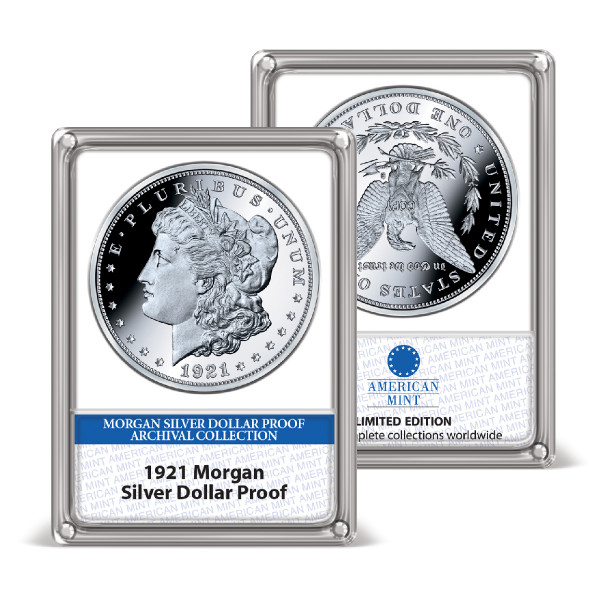 Known as the "Silver Dollar of the Old West," the Morgan consists of 90 percent pure silver and 10 percent copper. The first acceptable strike of the coin occurred on March 11, 1978, at the Philadelphia Mint, and the first minted Morgan dollar was presented to President Rutherford B. Hayes. Western mints soon became involved in the production of the new dollar -- the San Francisco and Carson City facilities began minting the Silver Morgan Dollar later in 1878, followedby the New Orleans Mint in 1879. The Denver Mint struck the coin in 1921 during its final production run.

Ameican Mint is Proud to Offer the 1921 Morgan Dollar Proof Archival Replica If you're one of the numerous collectors who covet the Morgan 1878-1904 or 1921 silver dollar, you've come to the right place. A faithful reproduction of the original, this coin features a striking portrayal of Anna Willes Williams, the teacher and philosopher George T. Morgan nominated to serve as the model for the coin's obverse. The reverse depicts a bald eagle, that enduring symbol of American freedom, with wings raised as if ready to take flight.

You'll Always Receive High-Quality Coins From American Mint Here at American Mint, we share your passion for exquisite collectibles of the highest quality. The 1921 Morgan Dollar Proof Archival Replica is just another example of our commitment to providing exceptional pieces that our customers are proud to own. All our collections have been crafted or assembled by our team of experts -- many of our items are limited editions that are only available from us.

We Make Collecting Affordable for Everyone As an American Mint customer, you will also have access to our extraordinarily low online prices. We're pleased to offer the 1921 Morgal Dollar Proof Archival Replica at a fantastic price. To order yours, add the piece to your shopping cart and complete the fast, secure checkout process. This product comes with our exclusive Money Back Guarantee for your protection and peace of mind.