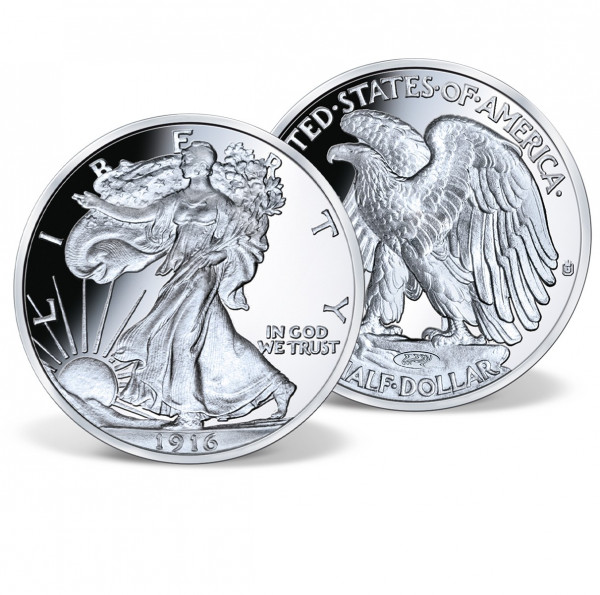 Includes a free preview of future issues in the collection Walk.Liberty $1/2 Proof Arch.. For more information, please refer to the Satisfaction Guarantee tab below. If you do not wish to preview future issues in the collection, you may purchase the single item using the 'Individual Item Only' tab at right.
Price $39.95 * $19.95
Total: $19.95
You save $20.00
Total: $39.95
Tweet
Share
Description Satisfaction Guarantee
Description
The creation of renowned sculptor and coin designer, Adolf A. Weinman, the Walking Liberty Half... more
Close menu
1916 Walking Liberty Half Dollar Proof Archival Edition

The creation of renowned sculptor and coin designer, Adolf A. Weinman, the Walking Liberty Half Dollar is considered by most experts to be one of the most beautiful coins in the history of the U.S. Mint.

Introduced in 1916, this iconic work of coin art featured a strong and proud Miss Liberty with an American flag draped across her shoulders, striding toward the sun as it rises on anew day. This powerful image served as inspiration during the tumultuous times during which the coins were issued, which encompassed World War I, the Great Depression, and World War II. The Walking Liberty Half Dollar would remain unchanged throughout its 31-year run. But the story of the beloved Walking Liberty doesn't end there. In 1986, Weinman's stirring, patriotic design was brought out of retirement to be reproduced on the obverse of the U.S. Mint's new Silver Eagle Bullion Coin.

Available exclusively from American Mint, this .999 pure silver-plated proof is meticulously reproduced from the first year of the famous Walking Liberty Half Dollar. Minted to the highest quality "Proof" standard, it comes in our NumiShield Archival Case to protect it for future generations.