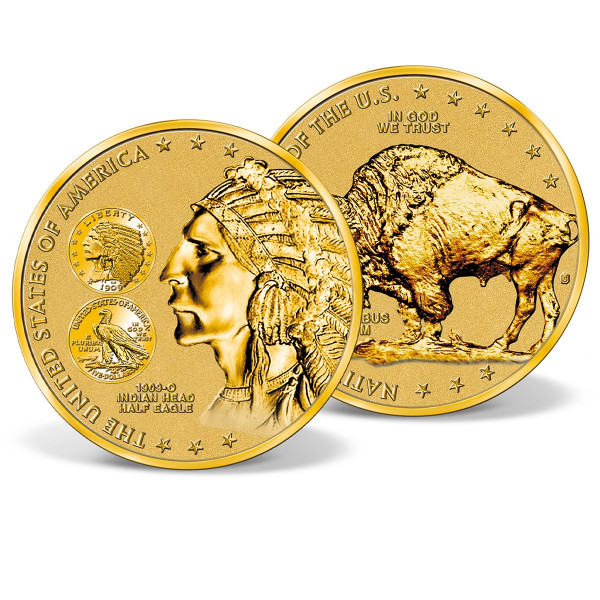 Includes a free preview of future issues in the collection Native Amer. Coins of the U.S.. For more information, please refer to the Satisfaction Guarantee tab below. If you do not wish to preview future issues in the collection, you may purchase the single item using the 'Individual Item Only' tab at right.
Price $99.95 * $19.95
Total: $19.95
You save $80.00
Total: $99.95
Tweet
Share
Description Satisfaction Guarantee
Description
In 1904, President Theodore Roosevelt decided that American gold coins lacked artistic merit and... more
Close menu
1909-O Indian Head Half Eagle

One of the few U.S. coin designs not featuring Lady Liberty, BelaLyon Pratt's Indian Head design caused a major stir when it began circulating in 1908. Besides depicting an Indian brave instead of Liberty, the coins also featured a rare incuse design where the images and legends sink below the surface of the coin, rather than rising above it. Today, Pratt's Indian Head design is considered an important aspect of the early 20th Century renaissance of Americancoinage.

A Magnificent Limited-Edition 24k Gold-Layered Reverse Proof To celebrate one of the most unique designs in U.S. coinage history, American Mint has created an exclusivemasterpiece: the 1909-O Indian Head Half Eagle Reverse Proof Commemorative Coin. Minted to the highest quality "Proof" standard, this reverse proof has a matte-finish background with the sculpted elements polished to a shiny mirror-finish -- opposite of the standard coining procedure and highly coveted among collectors.