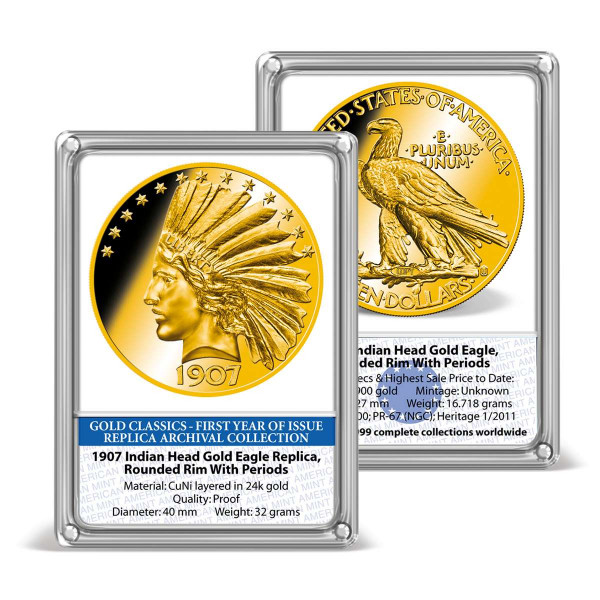 Includes a free preview of future issues in the collection Gold Classics-First Year. For more information, please refer to the Satisfaction Guarantee tab below. If you do not wish to preview future issues in the collection, you may purchase the single item using the 'Individual Item Only' tab at right.
Price $89.95 * $9.95
Total: $9.95
You save $80.00

In 1905, President Teddy Roosevelt decided that American coins were unattractive and failed to properly reflect the nation's standing as an economic power. Skirting government protocol, he hired world-famous sculptor Augustus Saint-Gaudens to redesign the $10 Gold Eagle. His design featured a youthful Miss Liberty who, at Roosevelt's request, wore a feathered Indian Headdress with the word LIBERTY on the band so the coin would have a distinctly American touch. When the Indian Head Gold Eagle went into production in 1907, the U.S. Mint only produced an estimated 50 "Proof" quality coins thatwere preserved for museums, numismatists, and those associated with the design. Today, very few of these magnificent treasures are known to still exist. When an original 1907 Indian Head Gold Eagle "Proof" came to auction in 2011, it sold for an unbelievable $2.185 Million!

Available exclusively from American Mint, this incredible replica coin has been meticulously reproduced from the first gold coin to feature Saint Gaudens' exquisite "Indian Head" design. Minted to the highest quality "Proof" standard and layered in 24k gold, it is handsomely presented in our NumiShield Archival Case to protect it for future generations. The 1907 Indian Head Gold Eagle Replica may be the only way for you to own one of these exceptional coins.