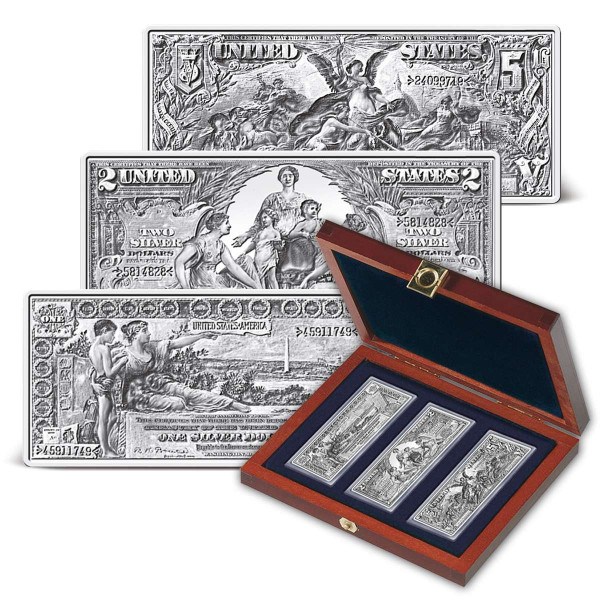 Silver Certificate were first issued by the U.S. Treasury beginning in 1878. They were a paper currency which could be exchanged for an equivalent amount of silver dollar coins. These large banknotes were paper currency of unparalleled beauty and often featured intricately detailed engravings of allegorical themes and historical figures. The 1896 series, now known as the Educational Series, wasexceptionally exquisite and depicted technology new to the 19th century.

The one-dollar certificate entitled History Instructing Youth features a female personification of History directing the eyes of a young man across the Potomac River to Washington D.C. with the Washington Monument and the Capitol Building in the background. Known as Science Presenting Steam and Electricity to Commerce and Manufacture, the two-dollar certificate depicts an elder figure representing Science introducing two children - Steam and Electricity - to more mature figures of Commerce and Manufacture. The five-dollar certificate is titled Electricity Presenting Light to the World and features the winged female figure of Electricity holding an electric lamp high above her head. Sheis surrounded by Fame heralding her achievement, Jupiter holding lightning to power the lamp, and Peace rising above the U. S. Capitol.