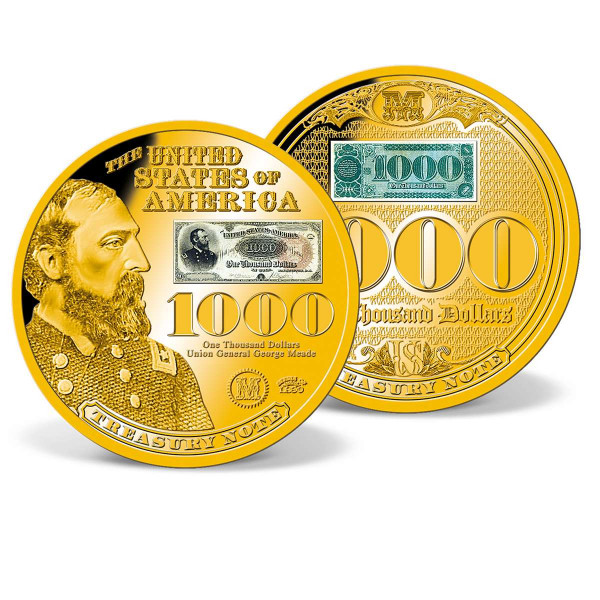 First issued in 1890, Treasury Notes were large pieces of paper currency, offered in several denominations that represented an equal amount of silver. The largest denomination was the $1,000 Treasury Note that featured Union General George Meade on the obverse. The note was nicknamed the "Grand Watermelon Note" because the large, rounded zeroes on its back were green and had an intricately engraved texture that resembled a melon's rind. The design was so unpopular with the public and widely criticized by everyone - including those at the Treasury Department - that they quickly made plans toalter the design as soon as possible.

Only 28,000 of these watermelon notes were ever printed, and only 7 are known to exist today. Classified as a "Legendary Rarity," the 1890 Grand Watermelon Note shattered previous auction records when it became the first U.S. currency note to cross the $1 Million mark at auction in 2005. Then, in 2014, the Grand Watermelon Note once again made history when it sold for an astounding $3.29 Million!

Luxuriously layered in 24k gold and minted to the highest quality "Proof standard, this AMERICAN MINT EXCLUSIVE coin features a full-color reproduction of the 1890 Series $1,000 Treasury Note. Framing the photo-realistic inset is a highly detailed engraving of General George Meade just as he appears on the obverse of the original banknote. The coin's reverse features a full-color print of the back of the note with the "Grand Watermelon design that distinguishes the 1890 series from the following years.

Don't Wait to Addthe 1890 $1000 Treasury Note Coin to Your Collection Issued in 2014, we've limited our minting of this in-demand treasury note coin to only 9,999 pieces worldwide. You'll want to act quickly to make it a valued member of your coin collection. But, unlike the original note, you won't have to spend millions of dollars to own this one-of-kind item! As part of the American Mint ongoing mission to make high-quality collectibles affordable, we offer the coin at a substantially discounted price. You'll also get a Certificate of Authenticity that verifies the item's size and materials and includes interesting facts about the piece.