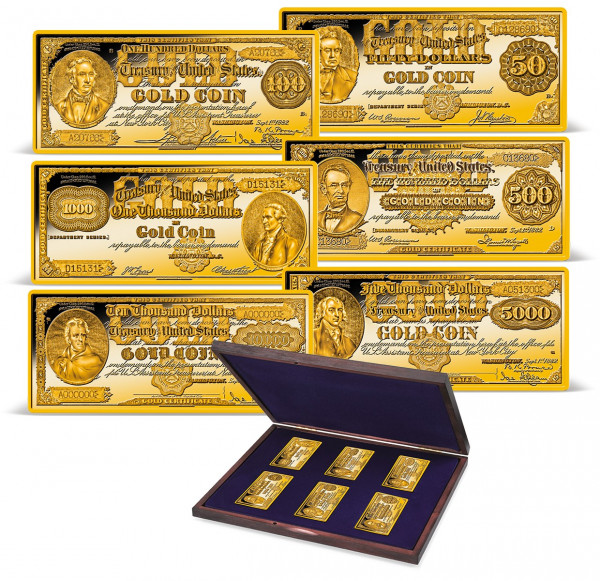 Gold Certificates were magnificently designed pieces of paper currency that represented real gold coinage. The large-size banknotes, like the ones issued in 1882, were the highest denomination banknotes in our nation's history and typically featured historical Americans on the obverse and a brilliant orange engraving on the reverse.

Gold Certificates, colorful and vivid, were originally created to represent actual gold coinage, giving the note's holder ownership to the corresponding amount of gold coins. With the reverse a brilliant golden orange, symbolic of the gold coins they represent, and an obverse that typically featured the portrait of a significant American, most often a U.S. President, Gold Certificates are still among the most attractive of all currency ever printed by the U.S. Treasury.

During the Great Depression, the government officially ended the practice of redeeming Gold Certificates for gold coins. It actually became illegal to possess the notes. Most of these magnificent banknotes mwere confiscated and destroyed.

Today, precious few original specimens of this delicate paper currency still exist. When one of these rare notes doappear at auction they often reach prices of several thousand dollars and, in some cases, have even surpassed the million dollar mark!

Now, American Mint proudly presents a complete set of 24k gold-layered ingot reproductions of the rare and valuable 1882 Series Gold Certificates. Available for the first time as a complete set, these 6 AMERICAN MINT EXCLUSIVE ingots are meticulously reproduced from the original 1882 Gold Certificates. Each ingot is minted to the highest quality "Proof" standard and layered entirely in 24k gold. The ingots are encased in individual protective capsulesto preserve their golden finish from damage and wear. Presented together in a Premium Collector's Box, this complete set is strictly limited to only 9,999 sets worldwide.