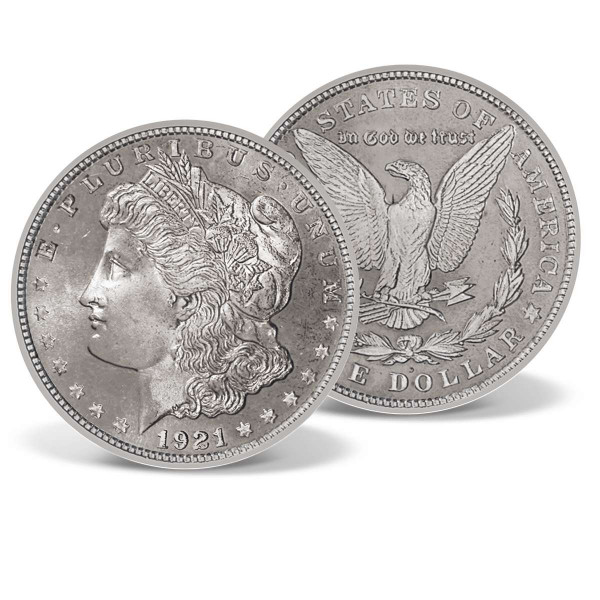 Includes a free preview of future issues in the collection Coins of the 20th Century. For more information, please refer to the Satisfaction Guarantee tab below. If you do not wish to preview future issues in the collection, you may purchase the single item using the 'Individual Item Only' tab at right.
Price $99.95 * $49.95
Total: $49.95
You save $50.00
Total: $99.95
Tweet
Share
Description Satisfaction Guarantee
Description
The Morgan Dollar, named after its designer, George T. Morgan, was minted during one of the most... more
Close menu
1878-1921 Silver Morgan Dollar

Ameican Mint is Proud to Offer the 1878-1921 Silver Dollar If you're oneof the numerous collectors who covet the Morgan 1878-1904 or 1921 silver dollar, you've come to the right place. American Mint is your headquarters for this highly sought-after collectible, of whichonly 17 percent of the approximately 305 million pieces have managed to survive.

The coin features a striking portrayal of Anna Willes Williams, the teacher and philosopher George T. Morgannominated to serve as the model for the coin's obverse. The reverse depicts a bald eagle, that enduring symbol of American freedom, with wings raised as if ready to take flight.

We Make Collecting Affordable for Everyone As an American Mint customer, you will also have access to our extraordinarily low online prices. We're pleased to offer the 1878-1921 silver door at a fantastic price. To order yours, add the piece to your shopping cart and complete the fast, secure checkout process. This product comes with our exclusive Money Back Guarantee for your protection and peace of mind.