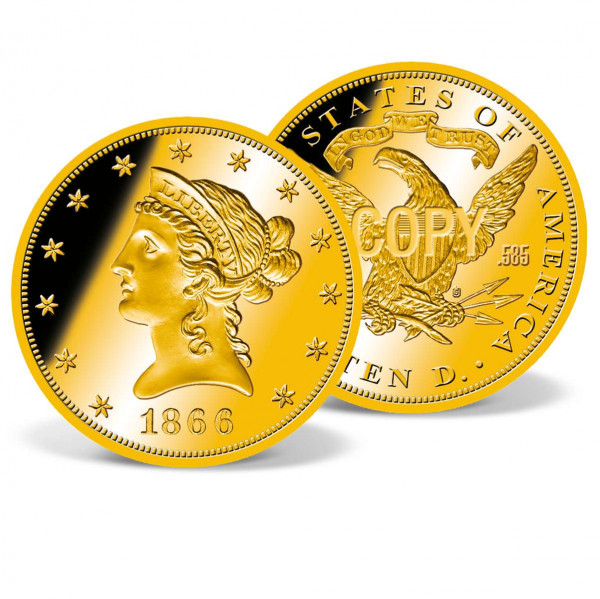 Includes a free preview of future issues in the collection Gold In God We Trust Repl.C.. For more information, please refer to the Satisfaction Guarantee tab below. If you do not wish to preview future issues in the collection, you may purchase the single item using the 'Individual Item Only' tab at right.
Price $129.95 * $29.95
Total: $29.95
You save $100.00
Total: $129.95
Tweet
Share
Description Satisfaction Guarantee
Description
In the wake of the Civil War, there was a profound increase in religious sentiment as the... more
Close menu
1866 Liberty Head Eagle Replica Gold Coin

In the wake of the Civil War, there was a profound increase in religious sentiment as the American people sought solace and strength after a national tragedy. The Rev. Mark R. Watkinson, a Baptistminister from rural Pennsylvania, sent a letter to the Secretary of Treasury, Salmon P. Chase, urging that the U.S. recognize God on its coins. Chase embraced the idea and directed Mint officials toproceed with designs. Several patterns of various denominations were struc with various mottos, such as "God and Our Country" or "God Our Trust." The final selection was "IN GOD WE TRUST."

The first coin to receive the motto was the 1864 two-cent piece. The Coinage Act of March 3, 1865, legislated that the motto appear on gold and silver coins as well. The first gold coin to bear the motto was the 1866 $10 coin. A flowing banner with the motto was added above the eagle's head on the coin's reverse. The 1866 Liberty Head Gold Eagle with Motto is now one of the most sought-after coinsin the Mint's history. On July 11, 1955, Congress passed legislation requiring "IN GOD WE TRUST" to appear on all of our nation's coins and paper currency. The following year, "IN GOD WE TRUST" was officially declared the national motto.

Designed by James B. Longacre, the Liberty Head Eagle features a left-facing Liberty, her hair bundled and secured with a beaded tie, with a few loose curls cascading down her neck. She is encircled by thirteen six-point stars. On the reverse, a left-facing heraldic eagle appears, wings outstretched with a shield, a bundle of arrows, and an olive branch in its talons.

Specially minted to mark the 150th Anniversary of the motto "IN GOD WE TRUST" appearing on American currency, American Mint proudly presents a solid 14k gold replica of the very first gold coin to bear God's name. Meticulously reproduced from the 1866 Liberty Head Eagle with Motto, this replica is minted to the highest quality "Proof" standard and comes in a protcetiveshell to preserve it for future generations.