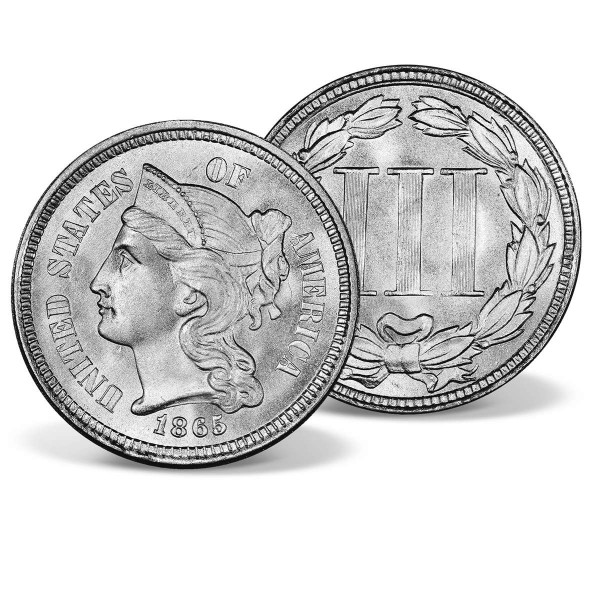 In 1851, a coin with the odd denomination of three cents was introduced. Originally minted in silver, the main purpose of these small coins was to facilitate the purchase of first-class postage stamps which sold for three cents at the time. During the economic turmoil of the Civil War, silver coins were hoarded and melted down for their precious metal content. Congress countered this by issuingpaper money in three-cent denominations, but the small slips of paper became ragged and dirty, and the public came to disregard them.

The solution came in the form of a nickel-copper alloythree-cent coin. Larger than the original silver version, the new nickel-copper alloy coin was called the three-cent nickel. It was introduced by the United States Bureau of the Mint in mid-1865, justafter the North finally claimed victory over the South in the Civil War and President Lincoln was assassinated at Ford's Theater.

Designed by James B. Longacre, one of the greatest coin designers in American history, the newly designed three-cent nickel featured an engraving of Lady Liberty wearing a coronet bearing the name LIBERTY and a ribbon binding her hair. For the reverse, Longacre placed the roman numeral III within a laurel wreath. The three-cent nickel was very popular when it first entered circulation.

The coin was only minted in Philadelphia and its design remained basically untouched for its entire run. But by 1889, postal rates had changed and the pretense for needing a three-cent coin ended. The denomination was discontinued and millions were returned tothe Mint to be recoined into Liberty five-cent nickels.

Now You Can Own an Authentic 1865 3 Cent Nickel Today, savvy collectors like you know the importance of having such a numismatic rarity in their collection. American Mint is making it possible to add a genuine 1865 U.S. 3 Cent Nickel to your collection. This coveted piece is in "very good" condition, which means all the major design elements are still evident. We'll include a Certificate of Authenticity, which certifies the size and materials and offers a variety of interesting facts about the item.

Get a Great Price on Your 1865 3 Cent Nickel While the 1865 3 Cent Nickel's value can vary, you can purchase yours at a significantly discounted online price from American Mint. It's our way of making collecting beautiful coins affordable for everyone. If you choose to add several pieces to your collection, you can pay in monthly installments if you spend more than $100. All orders of $150or more are eligible for free shipping.