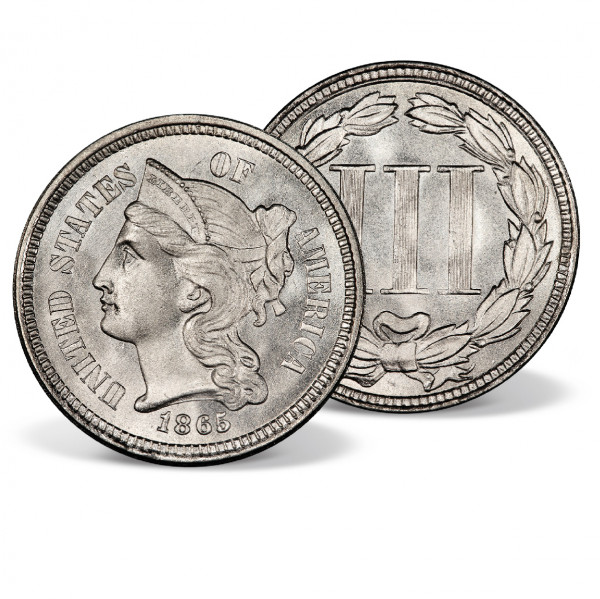 The Civil War was a devastating conflict that ripped apart our nation, pitting North against South and brother against brother. As the war dragged on much longer than anyone anticipated, resourceswere stretched thinner and thinner. Many citizens worried that paper money and government bonds might quickly become valueless, so they began hoarding coins for their valuable metal content. Suddenly,federal coinage like nickels, dimes, and other small cent coins simply vanished from circulation.

In order to make up for the lack of small coins, the government approved a new three-cent silver coin known as a trime. Designed by James B. Longacre, the silver three-cent coin's obverse featured a six-pointed star with a striped shield in the center. In later issues, the reverse depicteda roman numeral three with an olive branch above and a bundle of arrows below. The silver three-cent piece was eventually replaced with a nickel three-cent piece because people began hoarding the silver.

This exciting collection brings together some of the rarest and most sought-after small coins from the historic Civil War era--each more than 130 years old!--to preserve an important piece of America's numismatic history that nearly vanished in the fog of war.

You'll Love Our Affordable Online Pricing If you're tired of paying high prices for your coins, you'll appreciate partnering with American Mint. Our mission is to deliver high-quality coins and collectibles at a budget-friendly cost. We're offering these genuine Very Fine examples of the Three-CentNickel for sale at a surprisingly low price. The opportunity for free shipping and interest-free monthly installments (if meeting eligibility requirements) can make purchasing coins easier and more convenient.

Order Your Genuine Three Cent Nickel Today Our streamlined ordering simplifies the process of purchasing our products online. If you need help, you can reach us by phone on weekdays at 1-877-807-MINT. And be sure to check out all our fantastic commemorative coins while as well.