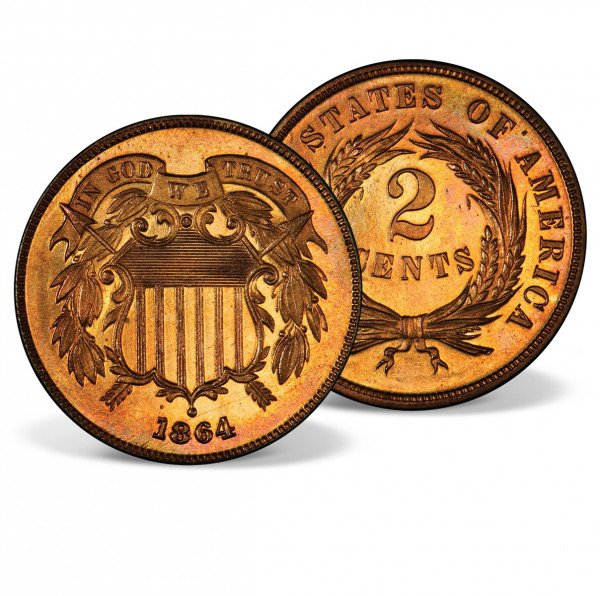 Includes a free preview of future issues in the collection Vanishing Coins of Civil War. For more information, please refer to the Satisfaction Guarantee tab below. If you do not wish to preview future issues in the collection, you may purchase the single item using the 'Individual Item Only' tab at right.
Total: $99.95
Total: $99.95
Tweet
Share
Description Satisfaction Guarantee
Description
The two-cent piece was produced by the Mint of the United States for circulation from 1864 to... more
Close menu
1864-1873 Two-Cent Piece

The two-cent piece was produced by the Mint of the United States for circulation from 1864 to 1872 and for collectors in 1873. Designed by James B. Longacre, there were decreasing mintages each year, as other minor coins such as the nickel proved more popular. It was abolished by the Mint Act of 1873.

The Vanishing Coins of the Civil War The Civil War was a devastating conflict that ripped apart our nation, pitting North against South and brother against brother. As the war dragged on much longer than anyone anticipated, resources were stretched thinner and thinner. Many citizens worried that paper money and government bonds might quickly become valueless, so they began hoarding coins for their valuable metal content. Suddenly, federal coinage like nickels, dimes,and other small cent coins simply vanished from circulation.

In order to make up for the lack of small coins, the government released a new two-cent coin struck in bronze, and some privatemerchants even created their own "tokens" to keep day-to-day commerce from stopping. But these were only small mintages meant to alleviate the economic hardships of war. When the fighting finally ended, production of small coins increased, phasing out these unique limited-run pieces.

This exciting collection brings together some of the rarest and most sought-after small coins from the historic Civil War era-each more than 130 years old!-to preserve an important piece of America's numismatic history that nearly vanished in the fog of war.