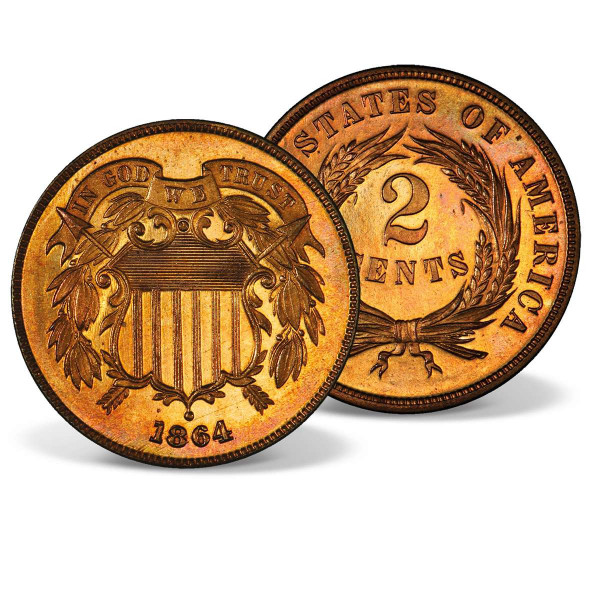 Total: $79.95
Tweet
Share
Description
Description
Introduced in 1864, the two-cent coin was created when the nation was in the midst of the Civil... more
Close menu
1864-1865 Two-Cent Coin

Introduced in 1864, the two-cent coin was created when the nation was in the midst of the Civil War. The devastating conflict had carried on far longer than anyone had predicted and with no end insight, coins were being hoarded instead of being spent, with many of them melted down for their metal content.

After the war ended in 1865, the public's attitude started to change and the two-cent coin became unfashionable and unpopular. After nine years of declining production, the two-cent piece was finally retired in 1873 and the denomination was never used on a coin again.

Enhance Your Collection With an 1864-1865 Two-Cent Coin An average collector may be unaware of this unique coin's existence, but you will certainly want to own this genuine 1864-1865 U.S. two-cent coin from the first two years of issue. Savvy collectors like you know the importance of having such a numismatic rarity in their collection. And with a real coin that was around when the Civil War ended and Abraham Lincoln was assassinated, it's like holding American history in your hand.

An 1864-1865 U.S. two-cent piece is also a great option to start your coin collection with or to gift to someone you love. It is minted in bronze, with 95% copper and 5% tin and zinc, delivering an eye-catchingfinish on this historical piece.

Why Purchase Your 1864-1865 Two-Cent American Coin From American Mint? When you order your 1864-1865 U.S. two-cent piece from American Mint, we want you to be able to buy with confidence. That's why each collectible coin includes a Certificate of Authenticity that details the coin's size and materials.

Our quality coins are all reasonably priced and frequently discounted on our site so all collectors - regardless of their budget - can add a historical touch to their collection. We also offer a money-back guarantee. If you arenot completely satisfied with your 1864-1865 two-cent American coin, please return it within 20 days of receiving your items. We will provide you with a replacement coin, a credit to your account, ora refund.

Order Your 1864-1865 U.S. Two-Cent Coin Today In addition to the 1864-1865 two-cent coin for sale on our site, we have an extensive legal tender antique collection that will add historical significance to your collection. Shipping is also free on all orders of $150 or more.

We look forward to being your reliable partner for all collecting!