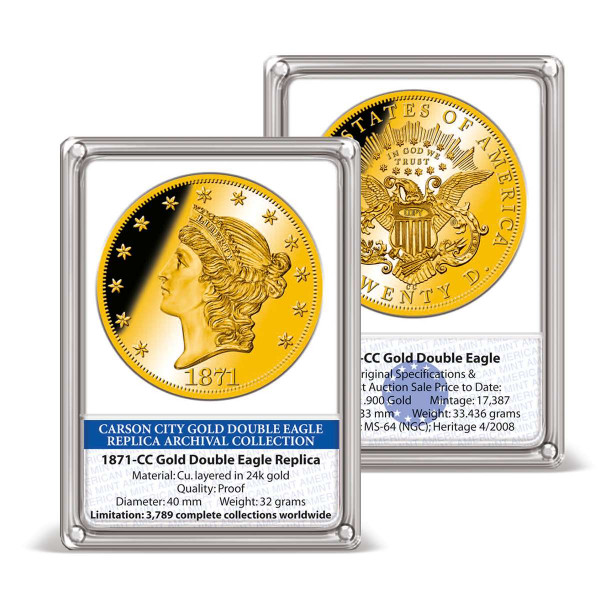 Includes a free preview of future issues in the collection CC Mint Gold Double Eagle. For more information, please refer to the Satisfaction Guarantee tab below. If you do not wish to preview future issues in the collection, you may purchase the single item using the 'Individual Item Only' tab at right.
Price $89.95 * $9.95
Total: $9.95
You save $80.00
Total: $89.95
Tweet
Share
Description Satisfaction Guarantee
Description
When James Barton Longacre became only the fourth Chief Engraver at the U.S. Mint in 1844, he... more
Close menu
1849-C Gold Liberty Head Dollar Replica

When James Barton Longacre became only the fourth Chief Engraver at the U.S. Mint in 1844, he was not well-received by the Mint Director and the Head Coiner of the Mint. When Longacre was selectedby Congress to design the new one-dollar and twenty-dollar coins, the directors tried to have him fired. Longacre prevailed and so began the career of one of the greatest coin designers in U.S. history. The very first coin he created was the Liberty Head Gold Dollar. First minted in had two reverse designs - the closed wreath and the open wreath. The Liberty Head Dollars that were minted at the Mint facility in Charlotte, NC (C), that year were all thought to be of the closed wreath variety. It wasn't until the early 1900s that the 1849-C "open wreath" variety was discovered. Today, only fiveexamples of this Longacre masterpiece are known to exist.

Operating from 1870 to 1893, the Carson City Mint struck more than 56 million silver and gold pieces with a face value of nearly $50 million. Compared to other Mint branches, Carson City had a rather small production rate, but these low numbers mean that any pieces still in existence today have experienced a sharp increase in value due to their relative rarity.