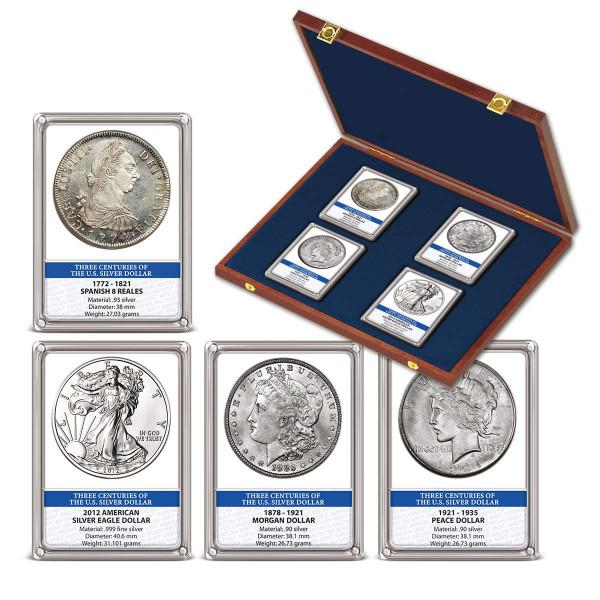 Total: $645.00
Tweet
Share
Description
Description
Even before America became a nation, silver coins were being used as currency in the colonies.... more
Close menu
Three Centuries of the Silver Dollar Coin Set

Even before America became a nation, silver coins were being used as currency in the colonies. The tradition of silver dollars in America began with the Spanish 8 Reales coins, which were minted inMexico and circulated in the American colonies in the early 1700s. So important were these silver coins that the Continental Congress agreed in 1784 to use them as the very basis of the new country'sentire monetary system. Ten years later, the newly organized U.S. Mint at Philadelphia began production of the first official U.S. silver dollar coin; however, the Reales remained legal tender in America until 1857.

The silver dollar had become the most popular form of money in use during our nation's formative years. As silver mines in America began to produce copious amounts of the treasured metal, the Mint began producing some of the most beloved coins in its storied history. Masterpieces like the beloved Morgan Dollar would entice collectors both past and present. Another historic silver coin, the Peace Dollar, was minted to symbolize the tangible desire for peace after the devastation of World War I.

Today, the only solid silver coin being produced in the U.S. isthe American Eagle Silver Bullion Coin. The most popular silver bullion coin in the world, these investment grade coins may bear the face value of one dollar, but as a bullion coin, their real valueis determined by the current price of silver. Through the centuries, the silver dollar has represented America, from her early years as a young nation to her current place as the most powerful nationin the world.

Set contains 4 solid silver coins from the past 300 years:

Strictly limited to only 999 complete sets worldwide, each coin is preserved in our NumiShield Archival Case to protect it for future generations and includes a felt-lined collector box, built of fine furniture-grade wood, custom designed to beautifully display your collection.