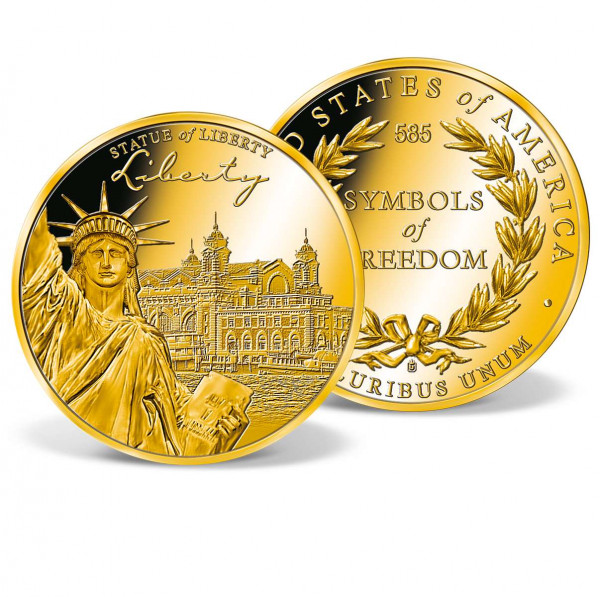 Includes a free preview of future issues in the collection Symbols of Freedom in Gold. For more information, please refer to the Satisfaction Guarantee tab below. If you do not wish to preview future issues in the collection, you may purchase the single item using the 'Individual Item Only' tab at right.
Total: $99.95
Total: $99.95
Tweet
Share
Description Satisfaction Guarantee
Description
She stands more than 300 feet tall and is recognized around the world as the quintessential... more
Close menu
Statue of Liberty Commemorative Gold Coin

She stands more than 300 feet tall and is recognized around the world as the quintessential symbol of freedom and American values. Since her dedication on October 28, 1886, the Statue of Liberty has welcomed countless immigrants and visitors to America.

During the heyday of the American melting pot, more than 12 million immigrants got their first glimpse of freedom when they gazed upon the Statue of Liberty and entered the United States at Ellis Island. Officially entitled "Liberty Enlightening the World," the Statue of Liberty was a gift from the people of France to the United States for the centennial celebration of America's independence.

Today, more than 130 years later, Lady Liberty continues to watch over New York City from her own island in the New York Harbor, lighting the way for a world in search of freedom.