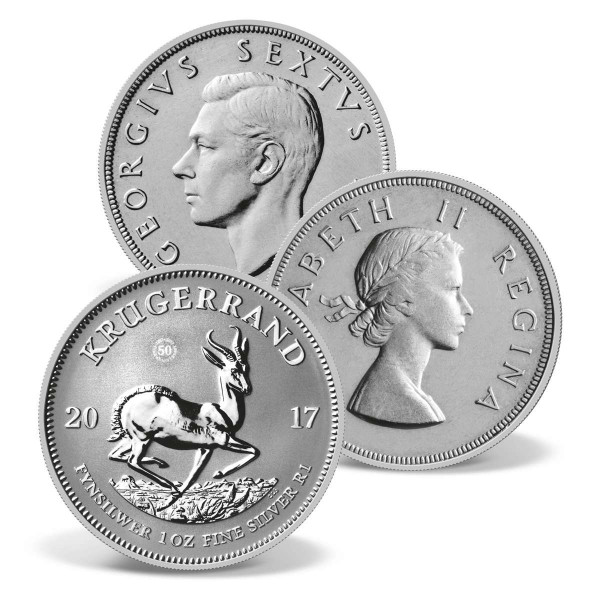 Originally settled by the Dutch in the 1600s, the nation of South Africa became a British colony in 1806. Even though South Africa received its independence in 1931, it continued to used the British pound-based monetary system. During this time, South African shillings featured the current British monarch on the reverse - which is often confused as coin's obverse. The 5-shilling coin was mintedin 500/1.000 pure silver and honored the national symbol of South Africa - the springbok - on the obverse. When the Republic of South Africa officially became a nation in 1961, it converted to the Rand monetary system.

In 1967, South Africa introduced the world's first solid gold bullion coin - the Krugerrand - as a way of making its gold available to individual buyers, such as Americans who at the time couldn't legally buy gold, but could own gold coins. The Krugerrand had the same classic springbok design that was first used on the 5-shilling coin in 1948 on the obverse. The reverse featured the portrait of Paul Kruger, an early President of the region when it was known as Transvaal.

Since 2017 marks the 50th Anniversary of the famous Krugerrand, the South AfricanMint introduced a special edition Krugerrand minted with 1 ounce of solid .999 pure silver. The "Premium Uncirculated" coin has digitally enhanced dies, producing coins with razor-sharp details, polished gleaming sculpting, and a frosted background. These landmark coins feature the special 50th Anniversary mintmark on the obverse and are produced in strictly limited numbers, which makes them an instant classic, highly coveted among collectors all over the world.

American Mint proudly presents a beautifully boxed set of genuine South African solid silver coins featuring the iconic springbok obverse. The 3 coin set includes: a King George VI 5-shilling coin minted between 1947-1951, a Queen Elizabeth II 5-shilling coin minted between 1953-1959, and a 2017 Krugerrand 50th Anniversary 1-rand coin. The coins are encased in individual protective shells and are presented together in a felt-lined coin box that includes a special-edition card. As with every item American Mint offers,your satisfaction is 100% guaranteed.