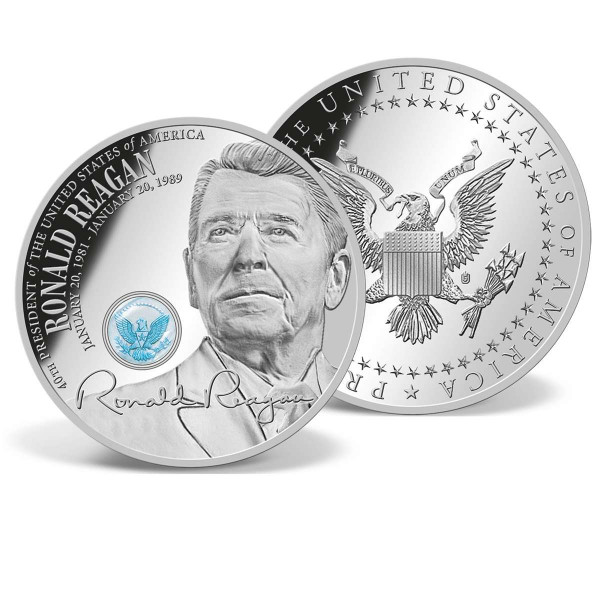 Includes a free preview of future issues in the collection Official Presidential Hologram. For more information, please refer to the Satisfaction Guarantee tab below. If you do not wish to preview future issues in the collection, you may purchase the single item using the 'Individual Item Only' tab at right.
Total: $99.95
Total: $99.95
Tweet
Share
Description Satisfaction Guarantee
Description
From screen idol to leader of the free world, Ronald Reagan's cool demeanor and commanding... more
Close menu
Ronald Reagan Official Presidential Hologram Commemorative Coin

From screen idol to leader of the free world, Ronald Reagan's cool demeanor and commanding presence made him one of the most popular Presidents in American history. When he entered the executive office in 1980, the country was mired in discontent from years of recession and a weakening international status. By 1989, when he finished his second term, America was once again a proud and confidentnation with the longest recorded period of peacetime prosperity to date. He was largely credited with being the catalyst in the 1991 downfall of communism in the Soviet Union. The public speaking skills he had finely honed from his years as a movie and television star served him well, endearing him to millions of Americans and earning him the moniker "The Great Communicator." Ronald Reagan died onJune 5, 2004, at the age of 93. Today, his legacy remains in the hearts of all Americans as he is universally revered as one of our nation's greatest Presidents.

Available exclusively fromAmerican Mint, this .999 pure silver-plated coin is minted to the highest quality "Proof" standard. The obverse features an exquisitely detailed portrait of Ronald Reagan with an engraved reproductionof his signature. What makes this coin so special is the Official Presidential Hologram that is set into the obverse - it is the only Reagan coin in the world to feature this official holographic inlay.