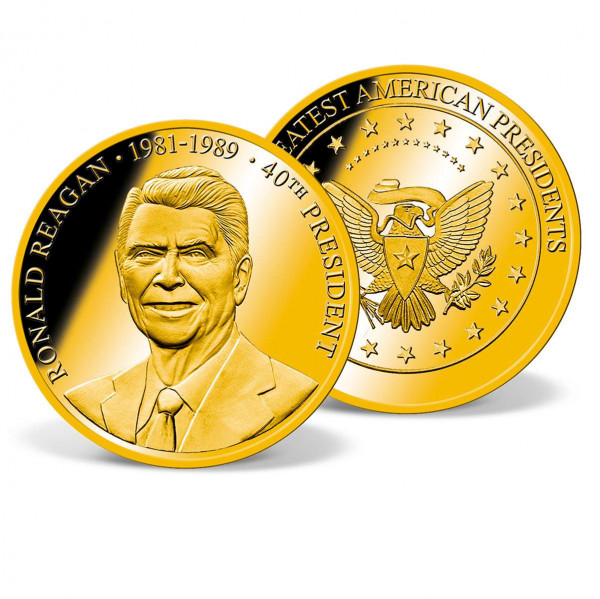 Includes a free preview of future issues in the collection The greatest U.S.Presidents. For more information, please refer to the Satisfaction Guarantee tab below. If you do not wish to preview future issues in the collection, you may purchase the single item using the 'Individual Item Only' tab at right.
Price $129.95 * $29.95
Total: $29.95
You save $100.00
Total: $129.95
Save $100.00 with our Satisfaction Guarantee
Tweet
Share
Description Satisfaction Guarantee
Description
Ronald Wilson Reagan followed an unusual path to the White House. Born into a poor Illinois... more
Close menu
Ronald Reagan Commemorative Gold Coin

Ronald Wilson Reagan followed an unusual path to the White House. Born into a poor Illinois family in 1911, Reagan worked his way through Eureka College in part by serving as a lifeguard during thesummer breaks. After graduation, he eventually became a radio broadcaster for the Chicago Cubs, a job that helped launch his career as a Hollywood actor. Reagan then went on to serve as governor of California from 1967 to 1975, which set the stage for his election as president in 1980.

From screen idol to the leader of the free world, Ronald Reagan's calm demeanor and commanding presence made him one of the most popular Presidents in American history. When he entered the executive office in 1980, the country was mired in discontent from years of recession and a weakening international status.

By 1989, when he finished his second term, America was once again a proud and confident country with the longest recorded period of peacetime prosperity to date. He received credit for being the catalyst in the 1991 downfall of communism in the Soviet Union. The public speaking skills he had finely honed from his years as a movie and television star served him well, endearinghim to millions of Americans and earning him the moniker "The Great Communicator."

Our Ronald Reagan 1981-1989 Commemorative Gold Coin Honors the Legacy of Our 40th President Meticulously designed, this dazzling tribute to the 40th president of the United States features a highly detailed engraving of Ronald Reagan on the obverse. The reverse bears the fitting title of "TheGreatest American Presidents" and features a depiction of a bald eagle, that enduring symbol of American freedom. Minted in solid 14k gold, the Ronald Reagan commemorative coin is sure to be a highlight of your collection  display it with pride in your home, office, or business establishment.

Our 1981 Ronald Reagan Coin Meets the Highest Standards of Quality The experts atAmerican Mint strive to create and assemble extraordinary collections that never fail to amaze our customers. This exclusive coin meets the highest quality "Proof" standard and comes in a protective capsule to preserve it for generations to come  a true collector's item. You'll also get a Certificate of Authenticity that validates the piece's size and materials and includes a host of fascinatingfacts about it. We've limited the minting to only 9,999 complete collections worldwide  don't wait until it's too late to get yours!

Purchase Your Ronald Reagan Commemorative Gold Coin at an Incredibly Low Online Price Why pay more than necessary for fantastic collectibles? We're pleased to offer the Ronald Reagan gold coin for sale at a budget-friendly price. If you're looking to stock up on coins and collectibles, you can purchase several items and get free shipping if your order is at least $150. You can even pay in interest-free installments if you spend more than $100. Place your order online today! Feel free to give us a call at 1-877-807-MINT from 8 a.m. to 8 p.m. EST Monday through Friday if you have questions or concerns.