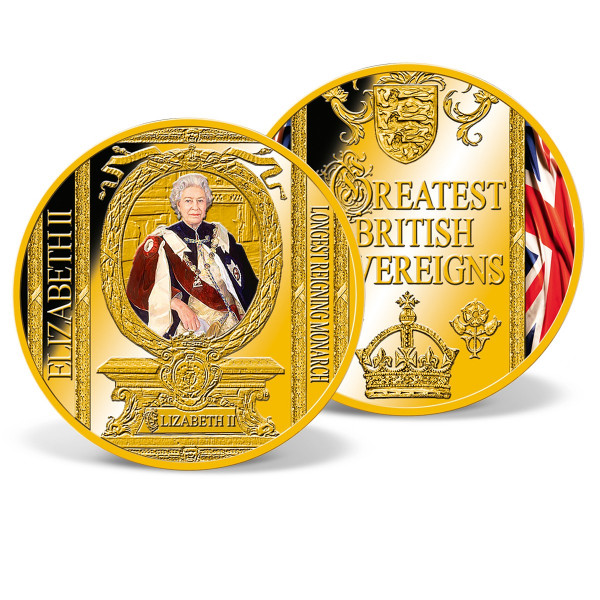 Includes a free preview of future issues in the collection Greatest British Sovereigns. For more information, please refer to the Satisfaction Guarantee tab below. If you do not wish to preview future issues in the collection, you may purchase the single item using the 'Individual Item Only' tab at right.
Total: $99.95
Total: $99.95
Tweet
Share
Description Satisfaction Guarantee
Description
In over 1,000 years of British history, there have only been three monarchs who have reigned for... more
Close menu
Queen Elizabeth II - Longest Reigning Monarch Commemorative Strike

In over 1,000 years of British history, there have only been three monarchs who have reigned for around 60 years: King George III, Queen Victoria and Queen Elizabeth II. The third longest-reign belongs to King George III who ruled for 59 years and 96 days. Queen Victoria was the second longest-ruling British monarch, reigning for 63 years and 216 days. On 9th September 2015, Queen Elizabeth IIovertook all her predecessors - as on that day she had reigned for 63 years 7 months and 2 days, surpassing the reign of her great-great grandmother Queen Victoria. This officially made Her Majesty the longest-reigning monarch in British history. The Queen has dedicated her life to the service of our country and has reached many important milestones during her lifetime. Elizabeth was proclaimed Queen at the age of 25, on 6th February 1952, after the death of her father, King George VI. Her coronation took place on 2nd June 1953 at Westminster Abbey, London. On 9th September 2015, Elizabeth IIbecame the longest-reigning British monarch ever. After the death of King Bhumibol Adulyadej of Thailand on 13th October 2016, Her Majesty became the world's longest-reigning living monarch and the world's longest-serving current head of state. On 6th February 2017, Elizabeth II became the first British Monarch to celebrate a Sapphire Jubilee, an incredible 65 years on the throne.

Her Majesty Queen Elizabeth II has been head of state for longer than any other monarch in British history. To honour this historic milestone a special commemorative strike has been issued. Minted in the highest quality "proof" and layered in finest 24-carat gold, this beautiful strike features a stunning colour portrait of Queen Elizabeth II.