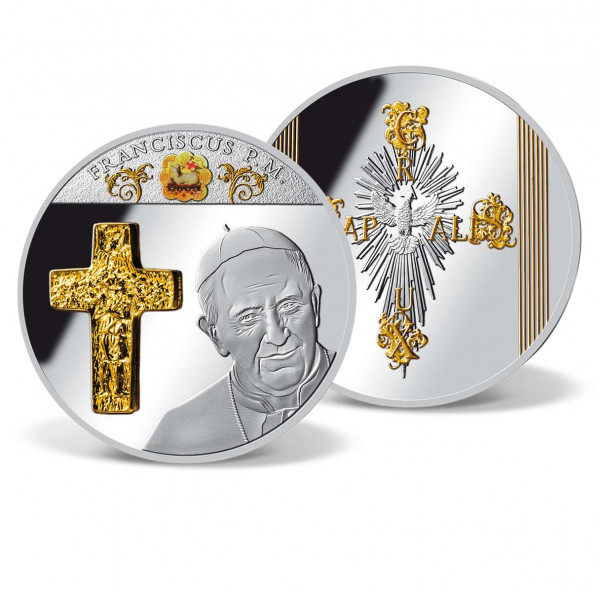 "This is me, a sinner on whom the Lord has turned his gaze. And this is what I said when they asked me if I would accept my election as pontiff. I am a sinner, but I trust in the infinite mercyand patience of our Lord Jesus Christ, and I accept in a spirit of penance."
Pope Francis

Jorge Mario Bergoglio was born on December 17, 1936, in Buenos Aires, Argentina. After he earned a degree in chemical technology, he found his true calling and turned to religious studies at the age of 21. He joined the Society of Jesus, also known as the Jesuits, in 1958 and was ordained into the priesthood in 1969. As a Jesuit - dedicated to intellectual pursuits, ending cultural indifference, and leading missionary efforts - he took a vow of poverty. He rode the bus, lived in a simpleapartment and cooked his own meals - even after he became a Cardinal. On March 13, 2013, Jorge Mario Bergoglio was elected the 266th Pope of the Catholic Church. A humble servant of God, he chose thename Francis in honor of St. Francis of Assisi who was known for rebuilding the church across the land, saving it from moral decay, and refocusing it on the poor as opposed to the ruling class. Sincehis ascension to the most holy of offices, Pope Francis has been embraced not only by Catholics but by everyone. His modesty and genuine affection for all - as well as his pragmatic approach to today's issues - has made him immensely popular all over the world.

Available exclusively from American Mint, this magnificent coin is layered in .999 pure silver. On the obverse is a highly detailed portrait of Pope Francis accented with a full-color "Lamb of God" emblem. A 24k gold-layered inlaid reproduction of his pectoral cross stands out in stark contrast on the coin's highly reflectivefinish. The reverse also features 24k gold accents. An incredible 2.75" in diameter, it is minted to the highest quality "Proof" standard and comes in a protective capsule to preserve it for generations to come.