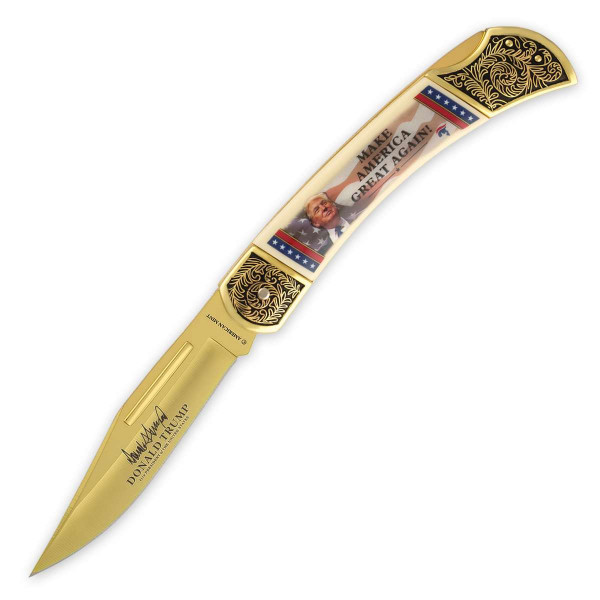 Includes a free preview of future issues in the collection Donald Trump Knife Collection. For more information, please refer to the Satisfaction Guarantee tab below. If you do not wish to preview future issues in the collection, you may purchase the single item using the 'Individual Item Only' tab at right.
Price $59.95 * $9.95
Total: $9.95
You save $50.00
Total: $59.95
Save $50.00 with our Satisfaction Guarantee
Tweet
Share
Description Satisfaction Guarantee
Description
When Donald J. Trump won the 2016 Presidential election, it was considered one of the greatest... more
Close menu
Make America Great Again Pocket Knife

When Donald J. Trump won the 2016 Presidential election, it was considered one of the greatest upsets in the history of American politics, but it wasn't a surprise to the millions of frustrated Americans who voted for the fiery underdog. Since his first day in office, he has shaken off the naysayers and taken the bold steps needed to improve the economy, secure our borders, and bring jobs backto America - just as he promised during his historic campaign.

He stands firmly in his belief that the U.S. is the greatest nation in the world and that when its people work toward a commongoal, they will "Make America Great Again," restoring its standing as a beacon of freedom, strength, and prosperity.

Donald J. Trump was born in Queens, New York, in 1946. The son of a successful real estate magnate, Trump used his innate business sense and leadership skills to become one of the best-known business and television personalities in the world. When Trump announced he was running for President, most experts considered him to be a long shot at best. But he energized the masses by drawing attention to domestic issues such as illegal immigration, the outsourcing of American jobs, the national debt, and Islamic terrorism.

His in-your-face approach to important issues endeared him to a voting public that had become increasingly frustrated with the American political machine. And to the surprise of everyone but those who voted for him, Donald Trump won the election and became our nation's 45th President.

Introducing the Make America Great AgainPocket Knife Available exclusively from American Mint, this museum-quality collector MAGA pocket knife is a special limited edition tribute to our nation's 45th President. Crafted in 420 stainless steel with a luxurious gold-tone finish, the 4" blade is etched with a reproduction of President Trump's signature. The gold-tone bolster is intricately engraved with finely detailed antiqued filigree. The handle has simulated bone grips that feature a full-color tribute to President Trump and his mission to "Make America Great Again."

A special Presidential medallion is set intothe back of the handle. President Trump supporters-as well as those who are passionate about collecting presidential memorabilia-will appreciate the craftsmanship found on all sides of this knife. Presented in a custom collector's box, our exclusive Donald Trump pocket knife includes a Certificate of Authenticity, assuring quality and value for future generations of proud Americans.

Benefits of Purchasing a Trump Pocket Knife From American Mint When you order your Donald Trump pocket knife from American Mint, we don't just guarantee the quality and authenticity of ourcollectibles. We also do everything to ensure you are completely satisfied with your purchase. On all orders, we offer a money-back guarantee within 20 days after you receive your purchase. We will even handle the shipping and handling. After you return your item, we will provide you with a replacement, refund, or credit to your account.

Order Your American Mint Make America Great Again Pocket Knife Today American Mint is proud to be your reliable source for high-quality collectibles and patriotic products such as our Donald Trump pocket knife. Order yours today and celebrate his mission of "making America great again."