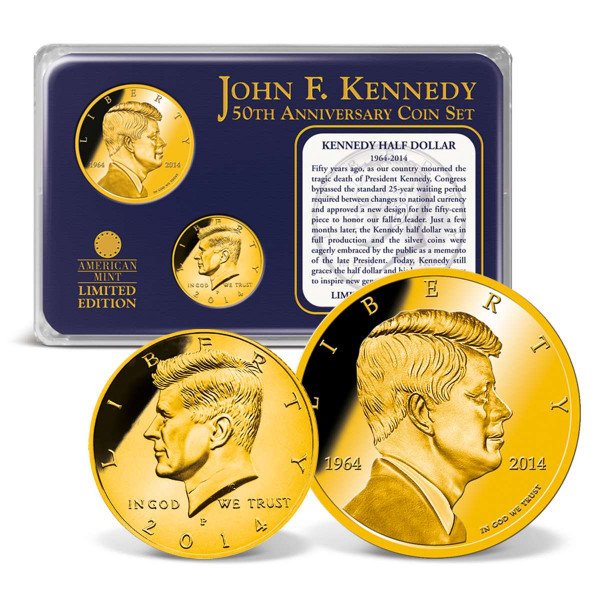 When John F. Kennedy was assassinated in Dallas on November 22, 1963, the nation was overcome by an incredible sadness and tragic sense of loss. For many Americans, the senseless killing of the young president signified the end to an era of optimism about the future that historians refer to as "Camelot." The nation attempted to move forward, although it soon became embroiled in the Vietnam Warand a period of civil unrest that lasted for the remainder of the decade.

Congress acted very quickly to immortalize the popular late President on the half dollar. In January 1964  a mere two months after JFK's tragic death  minting began on the Kennedy Half Dollar, which became very popular with a public that was still in mourning over the President's death. Today, 50 years later, JFKstill remains one of the most beloved Presidents of our time and the half dollar bearing his image is still one of the most collected coins in American history.

American Mint Is Pleasedto Offer the Kennedy Half-Dollar Coin Set American Mint honors the legacy of JFK with our beautiful two-piece Kennedy half-dollar coin set. The set features a genuine 2014 Kennedy Half Dollar in "Brilliant Uncirculated condition that has been luxuriously layered in 24k gold and an AMERICAN MINT EXCLUSIVE JFK 50th Anniversary commemorative coin, which is minted to the highest quality "Proof standard and layered in 24k gold. Handsomely packaged in our exclusive KeepSafe archival case, this exquisite coin set also features an informative history of the Kennedy Half Dollar.

American Mint: A Reliable Partner for All Your Coin Collecting Needs Our remarkable Kennedy half-dollar coin set exemplifies our commitment to offering only the finest collectibles to ourcustomers. All our privately minted coins and coin collections feature exceptional quality, painstaking attention to detail and unparalleled craftsmanship. We want you to experience the pride that comes with displaying such exquisite items in your home, office, or place of business  and we also hope you'll make us your exclusive source for all your collectibles.