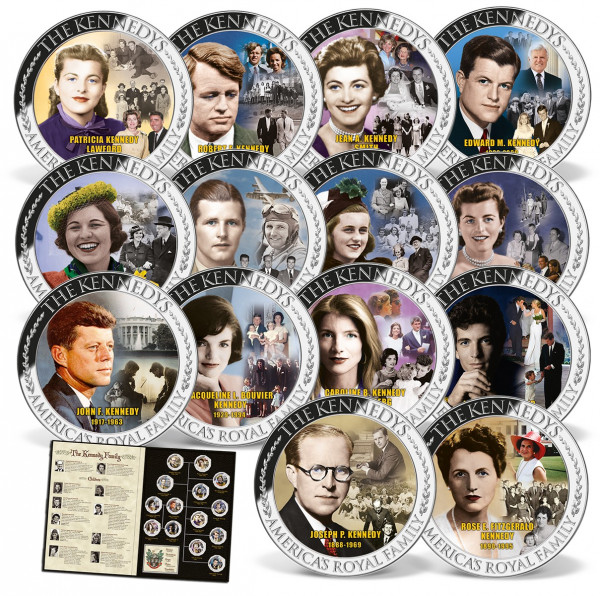 The Kennedys have been called America's unofficial royal family. Their story is one of l ofty ambitions, incredbile wealth, compassion, power, love, and, sadly, tragic death.

Joseph Kennedy, Sr. - the patriarch of the clan - was an ambitious man whose drive to succeed had built a powerful Boston business empire and who eventually became the U.S. Ambassador to the United Kingdom. In 1914, Joseph married Rose Elizabeth Fitzgerald - herself a daughter of another prominent Boston family - and together, they had nine children: Joseph, Jr., John, Rose, Kathleen, Eunice, Patricia, Robert, Jean, and Edward.

This generation - and those to come - would carry on the Kennedy tradition of public service and noteworthy achievements, as they serve in political office, work in filmand journalism, change the world as activists, and more.

The most prominent of the siblings was John. Like his brother, Joseph, Jr., John was a decorated hero in World War II, but John survived the war and went on to serve in the U.S. Congress before becoming President in 1961. The other brothers, Robert and Edward (Ted) also spent there lives serving in public office.

But thestory, like many legendary tales, has more than its share of tragedy. Untimely deaths - many by horrible accidents and murderious assassination - created the myth of a Kennedy Curse.

The story of the Kennedy family is the story of America itself . . . an empire built from nothing, rising to the pinnacle of power . . . struggling with tragedy, always rising again to serve.

Available from American Mint, the Kennedy Family Set consists of 14 meticulously designed coins. Each coin is minted to the highest quality "Proof" standard and is luxuriously plated in .999 pure silver. Every member of the Kennedy family - including JFK's wife, Jackie, and their children, Caroline and John, Jr. - is featured on a coin with a beautiful full-color tribute. These limited edition works-of-art are encased in individual protective capsules to preserve their mirror-like silver finish and brilliant color for future generations.