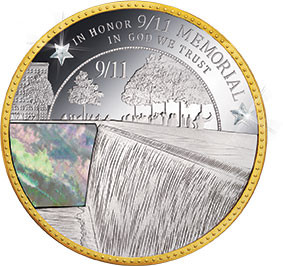 In the aftermath of the worst terrorist attack ever experienced on American soil, the nation mourned for those whose lives had been lost so tragically. The days following the attack saw the American people banding together to clean up and rebuild the buildings and lives that had been destroyed. Today, the United States is more dedicated than ever to the cause of Freedom and Democracy. We will never forget the events of September 11th, 2001, and nothing will ever defeat the American Spirit.

To honor the heroism and the selfless sacrifice shown by the American people, along with the unshakable spirit of our nation, we have designed a collection that includes each of the sites impacted by the attacks.  Unique to this collection, each coin will have a fragment of the mother of pearl on both the obverse and reverse.  The mother of pearl is a hard, shining iridescent substance found within the inner layer of shells that are inhabited by particular types of mollusks, such as oysters.  The mixture of colors that can include deep cobalt blue and peacock green and range through other hues of purple, pink, and cream.