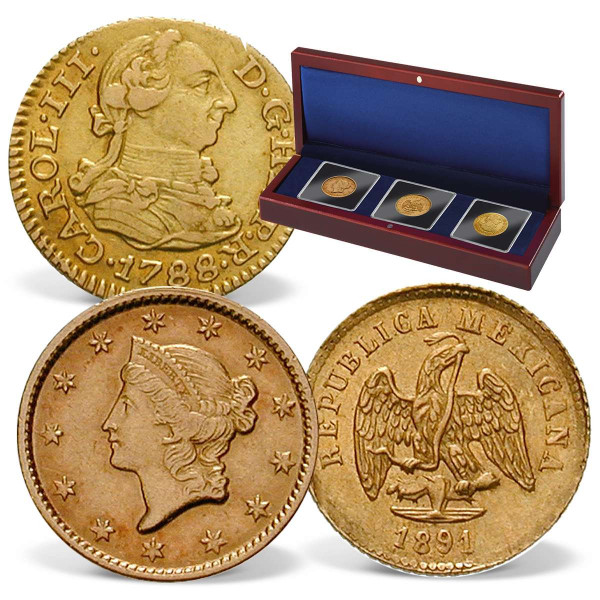 Tweet
Share
Description
Description
GOLD . . . It was the lure of gold that drew hundreds of thousands west into unknown territories... more
Close menu
Gold of the Wild West 3-Coin Set

GOLD . . . It was the lure of gold that drew hundreds of thousands west into unknown territories and it was the power of gold that built the Wild West. Return to the days of cowboys and Indians, when outlaws and lawmen rode the open ranges with genuine gold coins from the heady days of the Wild West. Imagine Wyatt Earp walking the dusty streets of Tombstone with one of these gold coins in hispocket, or Wild Bill Hickok casually flipping one onto the poker table inside a dancehall saloon.

Hold history in your hand . . . Our limited-edition 3-coin set features authentic Spanish, Mexican, and American gold coins that were genuine circulating currency in the days of the Wild West. Having survived the centuries, these solid gold treasures are a historically fascinating and convenient way to add gold to your holdings.

1849-1889 u.s. 1-Dollar Gold Coin
Country: United States
Years: 1849-1889
Metal : 900/1000 pure gold
Weight 1.672 g (.058 oz.)
Diameter: 13 mm (.51")
The only solid gold 1-dollar coin in the history of the U.S. Mint was produced from 1849-1889. It was created as a way to monetize the large amounts of gold comingfrom California. There were 3 designs, or "types," throughout its 40-year production - all created by legendary coindesigner, James Barton Longacre. It was the smallest American gold coin ever produced and over the centuries most have been melted down, turned into jewelry, or simply lost. That is why the few surviving 1-dollar gold coins are so coveted among collectors.

1870-1905 Mexican 1-Peso Gold Coin
Country: Mexico
Years: 1870-1905
Metal : 875/1000 pure gold
Weight 1.69 g (.059 oz.)
Diameter: 14 mm (.55")
The Mexican Peso was widely used in the early United States, most prominently in the Southwestern parts that were once controlled by the Mexican state. Minted in several denominations, these gold coins featured the Mexican Coat of Arms -an eagle grasping a snake in its beak - on the obverse. Even after the U.S. Mint began making its own dollar coin, the Mexican 1-Peso Gold Coin remained popular in the region, a lasting symbol of theWild West.

1772-1788 1/2 Escudo Carlos III Gold Coin
Country: Spain
Years: 1772-1788
Metal : 901/1000 Pure Gold
Weight 1.69 g (.059 oz.)
Diameter: 13 mm (.51")
After Columbusf discovery of the New World, Spain colonized much of the Western world in its search for gold. Before America was able to mint its own coinage, Spanish coins were the most common currency used. Escudos were Spanish coins of varying denominations and were minted in both gold and silver. The 1.2 Escudo Carlos III Gold Coin . named for King Charles III of Spain, whose portraitwas on the obverse . was the first gofficialh U.S. gold dollar. It provided the model on which the U.S. Mint based its own gold dollar coin in 1849.

Hours of operation: 8am to 8pm Eastern Time
Monday through Friday