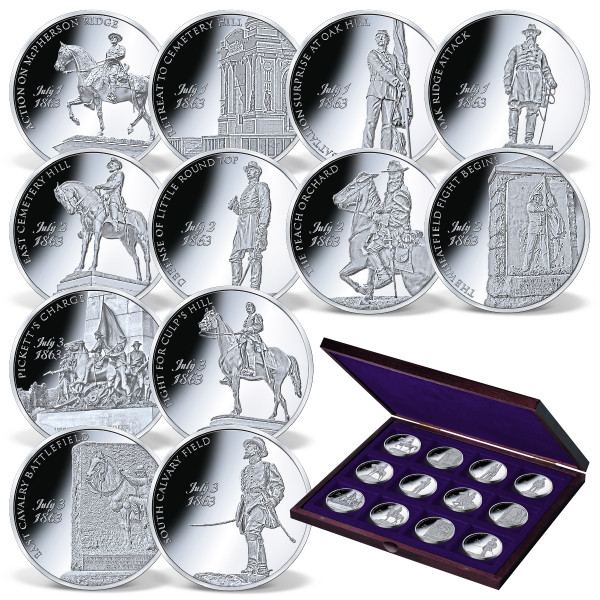 In the aftermath of Gettysburg, more than 50,000 men were reported killed, wounded, or missing, with both armies suffering more than 20,000 casualties. The Union had successfully rebuffed the Confederate invasion and their victory marked a critical turning point in the war; Robert E. Lee's image as an invincible leader was shattered, and the rebels were kept largely on the defensive for the remainder of the war.

When the fighting at the Battle of Gettysburg finally came to an end on the evening of July 3rd, 1863, an exhausted Union army had succeeded in preventing Robert E. Lee'sConfederate invasion of the North, but had suffered more than 20,000 casualties over the course of the three-day struggle. To honor the thousands of Union soldiers who tragically lost their lives during the bloody conflict, a total of seventeen acres of the battlefield were acquired by the commonwealth of Pennsylvania and dedicated as the Soldiers' National Cemetery.

On November 19, four months after the battle ended, President Lincoln attended a ceremony to consecrate the cemetery grounds. Although he spoke at the podium for less than three minutes, the Gettysburg Address would become one of the most famous--and most quoted--speeches in history, delivering a lasting tribute to the fallen soldiers who sacrificed their lives for the noble cause of defending their country. With just a few words, Lincoln stressed the broader significance of the war on America's future by reaffirming the country's commitment to the principles of freedom outlined in the Declaration of Independence: that all men are created equal and endowed by their Creator with certain unalienable rights. The solemn brevity of Lincoln's speech, along with the hard-won victory at Gettysburg, cemented Lincoln's legacy as a respected leader and a powerful orator and reinvigorated the Northern soldiers, pushing them harder in their fight to defeat the Confederate armies.

Remembering A Turning Point in U.S. History At American Mint, we're proud to offer our Gettysburg - Three Desperate Days coin set to pay tribute to this monumental event in U.S. history. Minted to the highest quality "Proof" standard, this 12-piece set is handsomely plated in .999 pure silver and comes in a custom wooden display box to keep your coins safe for generations.

Minted to the Highest Standards The Gettysburg - Three Desperate Days Coin Set is a proof-quality masterpiece that you'll be thrilled to own. Our expert crafters pay attention to the smallest details to create a products that will exceed your expectations. It also exemplifies our commitment to producing and assembling coins and collectibles that stand apart from the rest. Many of our items are American Mint exclusives that you won't find anywhere else.

Get Excellent Value for Your Hard-Earned Money American Mint can also help you save money on collectibles. We're offering the Gettysburg - Three Desperate Days Set at an incredibly affordable online price. Free shipping and handling applies to all orders of at least $150. If you'd like to spread your payment out, interest-free installments are available when you spend more than $100.

Order the Gettysburg - Three Desperate Days Coin Set Today! Ordering from American Mint is quick, easy, and secure. If you have questions, don't hesitate to call us at 1-877-807-MINT Monday through Friday from 8 a.m. to 8 p.m. EST.

Be sure to check out our entire inventory of commemorative coins and other collectibles.