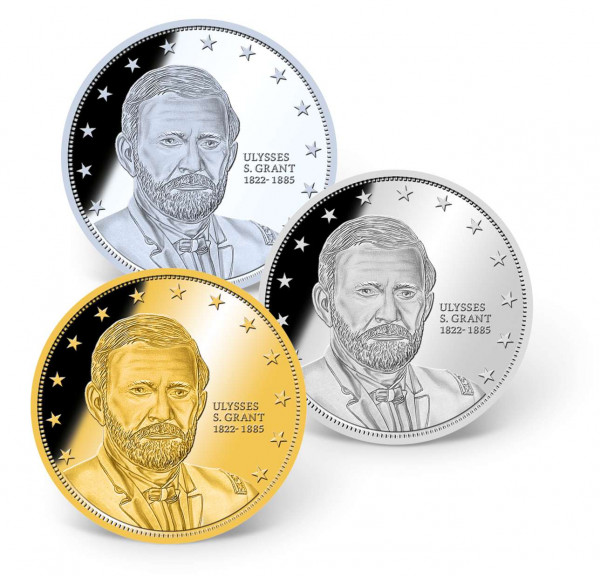 Ulysses Grant was the greatest Union hero of the Civil War. His hard-nosed fighting style won him the nickname "Unconditional Surrender" Grant. He was the author of the great Union victory at Vicksburg, which irrevocably altered the course of the war. After proving to President Abraham Lincoln that he had the courage to take the fight to the Confederates, Grant was elevated to General of the Army, an exalted rank previously held only by George Washington. Incredibly popular with his men, Grant was a general the soldiers were willing to fight and die for. In a defining moment of our nation'shistory, he accepted Confederate General Robert E. Lee's surrender at Appomattox, ending the Civil War.

Our Three-Piece Ulysses S. Grant Commemorative Coin Set Meticulously designed by American Mint--in conjunction with The National Civil War Museum--for the Sesquicentennial of the Civil War, this set of three remarkable coins commemorates the strength and honor of the Union's greatest general. Each coin features a highly detailed image of Ulysses S. Grant on the obverse and is exquisitely layered in a precious metal: one in .999 pure silver, one in 24k gold, and one inpure platinum! You'll marvel at the level of craftsmanship that goes into every coin we produce.

The Ulysses S. Grant Coin Set Offers Exceptional Quality At American Mint, we strive to offer expertly crafted coins and coin collections -- and this one-of-a-kind set is no exception. These coins are minted to the highest quality "Proof" standard and come in a beautiful woodencollector's box, custom-crafted to preserve and display your precious coins for generations to come -- a true collector's item. You'll also receive a Certificate of Authenticity that verifies the sizeand materials and offers several interesting facts about each of the coins.

Save Money When You Buy From American Mint At American Mint, our goal is to offer commemorative coins and other exciting collectibles at a low cost. These Ulysses S. Grant gold, silver and platinum coins are available online at an amazingly affordable price. All orders of at least $150 receive freeshipping and handling. If you spend more than $100, you can choose to pay in interest-free monthly installments to make your purchase even more budget-friendly.

Don't Wait Until It's TooLate to Get Your Ulysses S. Grant Coin Set We've only minted 1,861 of these sets of coins with Ulysses S. Grant on the obverse. The number has significance: 1861 was the year that the U.S.Civil War began. Due to the limited supply, you'll want to order yours now before they run out.

Have questions or need assistance? Our friendly customer service team will be happy to help.You can reach us at 1-877-807-MINT, Monday through Friday from 8 a.m. to 8 p.m. EST. Don't forget to check out our entire selection of coins and commemoratives as well.