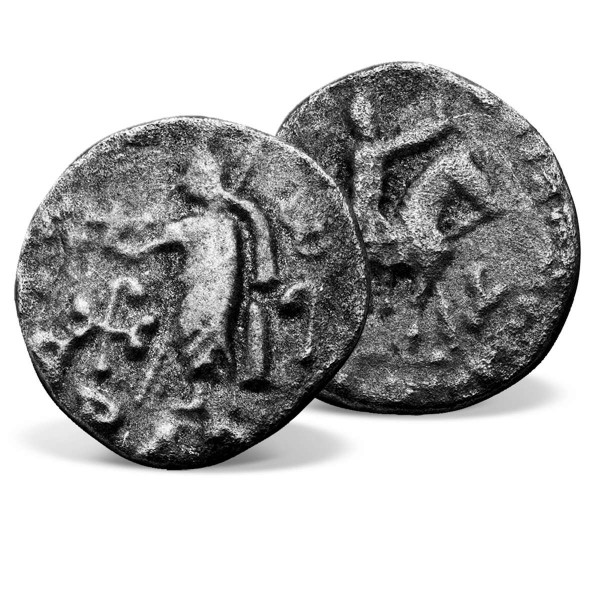 The silver drachmas of the powerful Bactrian ruler Azes II were in circulation during the life of Christ. Bearing the Greek script "King of Kings" and an Indian legend, they are among the first bilingual coins that were ever minted. It is possible that Azes II himself was the one who sent the three Magi to Bethlehem in order to pay homage to newborn Jesus.

King Azes II, who was a political decedent of Alexander the Great, was the ruler of Bactria from 35 B.C. to 5 A.D. Referred to as Gaspar, or Caspar, by religious scholars, it is believed that Azes II funded the Magi who gazed upon the Baby Jesus and offered gifts to the Christ Child. Specifically, Gaspar's journey to Bethlehem may have been financed by these silver coins, or drachmas.

It is likely he carried them to the Holy Land and used them to purchase the gifts of frankincense and myrrh. It is also possible that Jesus himself carried one of these coins in His hands.

The Drachmas of King Azes II The drachma, or King Azes II ancient silver coins, were handmade in ancient Greek times. Each blank disk was heated, then placed in between blocks of iron that had designs carved into them.When the artisan hammered the block, the design then transferred onto the soft disk.

At American Mint, these authentic silver coins are all in "Fine" condition and come with a Certificate of Authenticity. Most of these coins were issued before the birth of Jesus, but some had to have been minted on the very day of Christ's birth and all were in circulation when Jesus lived.

Even though these coins are ancient, you'll still be able to make out the design on each King Azes II coin. On the obverse, you'll find the king mounted on a horse, and on the reverse, you'll see Pallasholding a spear and shield. Each coin has a 13-16 millimeter diameter and weighs just 4 grams.

Why Include an Ancient Silver Drachma Coin in Your Collection? As one of the world's earliest coins, the silver drachma will add immense historical significance to your coin collection. It is closely tied to the history of Early Christianity and is believed to play a significantrole in events like the Epiphany.

American Mint: Your Reliable Source for Authentic Historical Coins When you purchase collectibles - especially ones that are as historicallysignificant as a King Azes II coin - you want to ensure you are receiving an authentic coin. At American Mint, we provide you with that confidence by including a Certificate of Authenticity, which verifies the coin's size and materials, as well as provides interesting facts about the coin.

Add an Ancient Silver Drachma Coin to Your Collection Today American Mint is proud toprovide collectors with quality coins for reasonable - and frequently discounted - prices. Order your King Azes II coin today and be sure to check out our collection of other unique and rare silver coins.