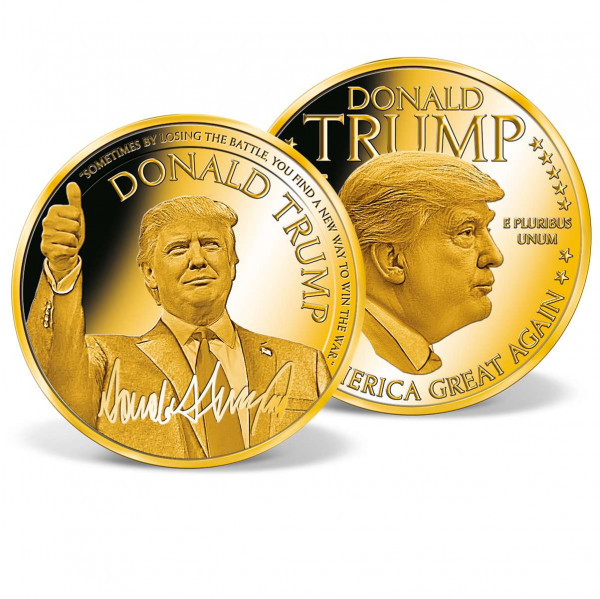 President Donald Trump officially began his mission to "Make America Great Again" on January 20, 2017, when he was sworn in as the 45th President of the United States. During the election, the charismatic billionaire rode a wave of revolution among the American electorate with a fire-brand style and no nonsense approach that resounded with a public that had become increasingly frustrated with the American political machine. On his very first day in office, President Trump started taking the bold actions needed to restore America's standing as a beacon of freedom, strength, and prosperity -just as he had promised during his historic campaign. He stands firmly in his belief that the U.S. is the greatest nation in the world and that when its people work toward a common goal, they will prevail.

Make America Great Again Coin to Commemorate the 45th President Available exclusively from American Mint, this solid 14k gold coin is a treasured keepsake of this important time in our nation's history. Minted to the highest quality "Proof" standard, it features a highly detailed image of Donald Trump with a quote from his historic Presidential campaign on the obverseand a tribute to President Trump and his mission to "Make America Great Again" on the reverse. The coin comes in a protective shell to preserve it for future generations.

Purchase Your MAGA Gold Coin Our skilled experts at American Mint created the stunningly detailed Donald Trump coin engraved with Make AmericaGreat Again. Create an unparalleled collection with our Make America Great Again Commemorative coin. Any purchase of more than $150 will eliminate shipping and handling from your order. You can chooseto pay in full for your order, but any orders of $100 or more are eligible for interest-free monthly installment payments.

You won't find a Donald Trump coin like the one from American Mintanywhere else, so get your Make America Great Again Gold coin while supplies last.

Order a Donald Trump Make America Great Again Commemorative Coin When you order with AmericanMint, you can expect the ordering process to be secure and easy. If you have any questions, feel free to call our customer service team members, who are eager to help you toll-free. Our representatives are available from 8 a.m. to 8 p.m. EST Monday through Friday.

Looking to add more to your collection aside from our Donald Trump Make America Great Again coin? Take a look at our inventory of presidential commemorative coins -- we're sure to have just what you want.