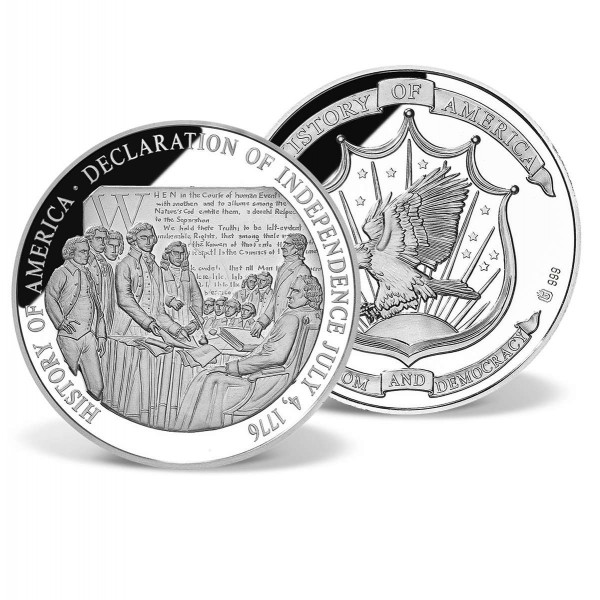 Tweet
Share
Description Satisfaction Guarantee
Description
The summer of 1776 was a defining time for the British colonies in America. Unfair taxation and... more
Close menu
Declaration of Independence Commemorative Coin

The summer of 1776 was a defining time for the British colonies in America. Unfair taxation and intolerable acts of oppression at the hand of the English monarch, King George III, had lit the fuseof revolution. The Declaration of Independence, crafted so eloquently by Thomas Jefferson, put forth the ideals of a free society, "of the people, by the people and for the people." With bold strokesof a quill pen, the founding fathers made proclamation that, from this day forth, the 13 colonies would forever be known as the United States of America.

In celebration of our nation's mostimportant document, American Mint has created an exclusive masterpiece: the Declaration of Independence commemorative coin. This coin is minted to the highest quality "Proof" standard and features a highly detailed engraving of John Trumbull's famous painting Declaration of Independence on the obverse. This historic coin comes in its own protective capsule to preserve it for future generations and includes a Certificate of Authenticity -- a true collector's item.