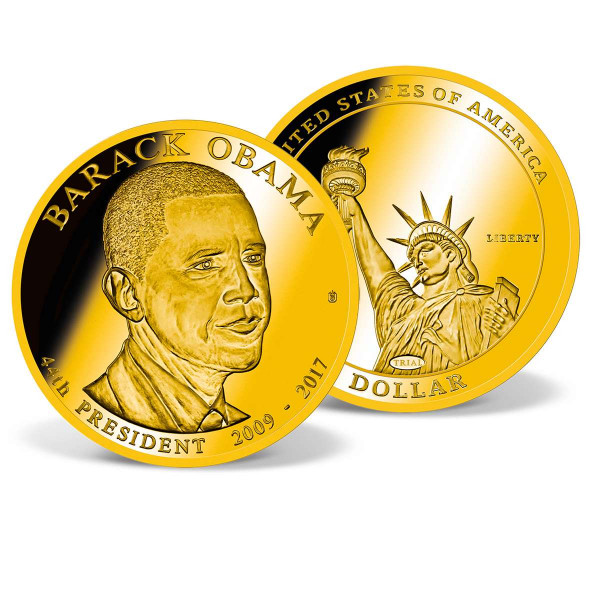 Includes a free preview of future issues in the collection Presidential Dollar Trials. For more information, please refer to the Satisfaction Guarantee tab below. If you do not wish to preview future issues in the collection, you may purchase the single item using the 'Individual Item Only' tab at right.
Total: $99.95
Total: $99.95
Tweet
Share
Description Satisfaction Guarantee
Description
Barack Obama was born in Hawaii on August 4, 1961. In the Illinois State Senate, he passed a... more
Close menu
Barack Obama Presidential Dollar Trial

Barack Obama was born in Hawaii on August 4, 1961. In the Illinois State Senate, he passed a major ethics reform, cut taxes for working families, and expanded healthcare for children and their parents. After an historic race against Senator John McCain, Barack Obama was elected 44th President of the United States and became the first African American to serve as Commander-in-Chief. In 2012, after a heated campaign against Republican challenger Mitt Romney, President Obama was re-elected for a second term.

As the 44th American president, Barack Obama inspired hope for unity, equality, and peace during his time as president. Barack Obama helped to close the nation's racial divide with his historic presidency and gained a reputation as one of the United States' most admired leaders. An inspiration to all, our 44th president's legacy is captured in this beautiful copper and gold presidential dollar coin.

With only 9,999 collections available, this beautiful coin honors Barack Obama's legacy as our nation's first African-American president. The Barack Obama Presidential Dollar Trial features a copper core with a gleaming layer of 24k gold. The intricate detailingon this coin is sure to capture the eye of any coin collector or history lover, with an image of the 44th U.S. President on the obverse side and the Statue of Liberty on the reverse side.

Presidential dollars such as the Barack Obama Gold Presidential Dollar Trial are highly sought-after additions to any coin collection. Whether you're looking to expand your collection or simply need a goodplace to start, this beautifully engraved coin serves as a shining addition to every coin collector's display. In addition to the coin's low price, we offer interest-free monthly payments for ordersover $100 and free shipping for orders over $150.

Own the Obama Dollar Coin for a Low Price If you want to own a meaningful token of our nation's history to pass down through generations, the Barack Obama Presidential Dollar may be your answer. To learn more about our Barack Obama Presidential Dollar Trial or any other coins in our inventory, talk to an expert at 1-877-807-MINT. Add one of these beautiful coins to your collection before they're gone!