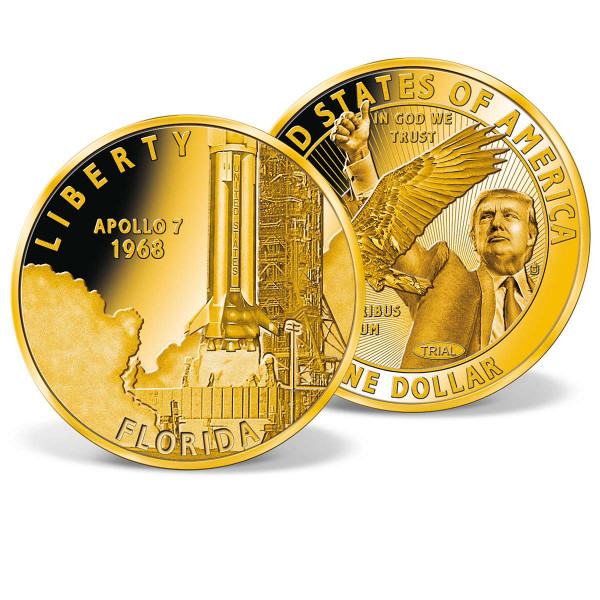 Includes a free preview of future issues in the collection American Innov. Dollar Trials. For more information, please refer to the Satisfaction Guarantee tab below. If you do not wish to preview future issues in the collection, you may purchase the single item using the 'Individual Item Only' tab at right.
Price $79.95 * $19.95
Total: $19.95
You save $60.00
Total: $79.95
Tweet
Share
Description Satisfaction Guarantee
Description
Florida and Apollo 7 The greatest accomplishment in our nation's history was the moon... more
Close menu
Apollo 7 - American Innovations Dollar Trial

Florida and Apollo 7
The greatest accomplishment in our nation's history was the moon landing and it would not have been possible without the innovations discovered in the Apollo 7 mission. Apollo 7 was the first spaceflight to carry an American crew into space. It launched 50 years ago on October 11, 1968, from Cape Kennedy Air Force Station, Florida. The crew of Walter M. Schirra,Donn F. Eisele, and R. Walter Cunningham spent nearly 11 days orbiting the earth and testing equipment that would be used to send Americans to the moon the next year.

American Innovations Dollar Coin Program
On July 20, 2018, President Donald Trump signed the American Innovation $1 Coin Act into law. This exciting new program will be the newest addition to the U.S. Mint's popular Golden Dollar coin series. Beginning in 2019, the Mint will begin producing $1 coins that recognize American innovation efforts of individuals or groups from each of the 50 States, the Districtof Columbia, and the five U.S. territories.