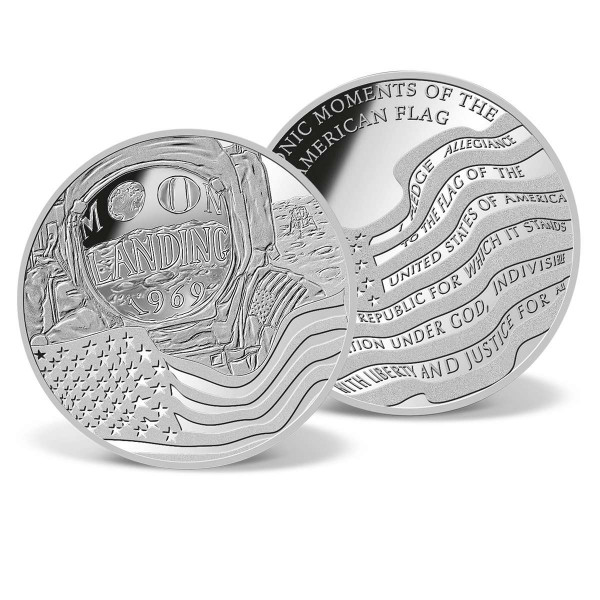 Tweet
Share
Description
Description
The American flag has been witness to some of the greatest events in human history. From the... more
Close menu
American Flag - Moon Landing Commemorative Coin

The American flag has been witness to some of the greatest events in human history. From the birth of our nation after the Revolutionary War, to the victories over tyranny in two World Wars and, more recently, in united defiance over terrorism, the Stars and Stripes have always waved proudly. But without a doubt, one of the greatest moments in the history of our flag happened on July 20, 1969,when Apollo 11 Commander Neil Armstrong became the first man to set foot on the lunar surface. His unforgettable words "one small step for man, one giant leap for mankind" became the mantra for American ingenuity and perseverance.

Today, two outward signs of this great achievement remain on the luna surface: the lasting impression of Armstrong's footprint and an American flag.

American Mint proudly presents our official American Flag - Moon Landing commemorative coin. Minted to the highest quality "Proof" standard and plated entirely in .999 pure silver, this magnificent coin is an exquisite tribute to our nation's proudest moment. The obverse features a dramatic image of Neil Armstrong proudly displaying the American Flag on the lunar surface. The reverse is magnificently engraved with a celebration of the Stars and Stripes that includes the Pledge of Allegiance. Available exclusively from American Mint, this limited-edition coin comes in its own protective capsuleto preserve it for future generations.