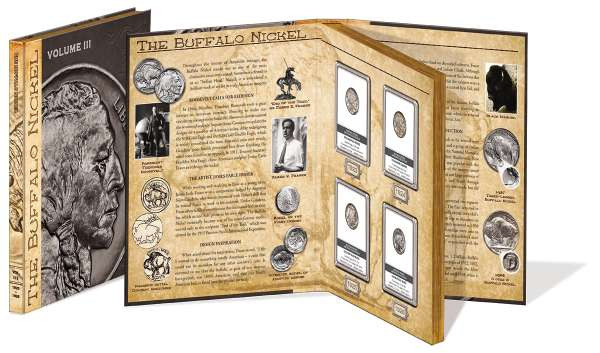 Throughout the history of American coinage, the Buffalo Nickel stands out as one of the most distinctive coins ever created. Sometimes referred to as an Indian Head Nickel, it is considered a brilliant work of art for its uniquely American imagery.

When asked about his inspiration, Fraser stated, "I felt I wanted to do something totally American--a coin that could not be mistaken forany other country's coin. It occurred to me that the buffalo, as part of our western background, was 100% American, and that our North American Indian fitted into the picture perfectly."

In1913, the first Buffalo Nickels to be minted were presented to President Howard Taft and a group of Indian chiefs during the groundbreaking for the National Memorial to the North American Indian at Fort Wadsworth, New York. Although the Buffalo Nickel was popular with the American public, the raised surface of the images caused difficulties during the minting process and large portions of the designs quickly became worn and faded through everyday use; minor changes to the coin were made, but did little to address these issues.

Despite its production issues, the Buffalo Nickel's distinctive design and truly American imagery made it a well-loved piece of U.S. currency, and by the end of its run, more than 1.2 Billion had been minted. With the exception of 1922, 1932, and 1933, years when no nickels were struck, the Mint continued production of Fraser's nickel until 1938, when it was replaced with the Jefferson Nickel.