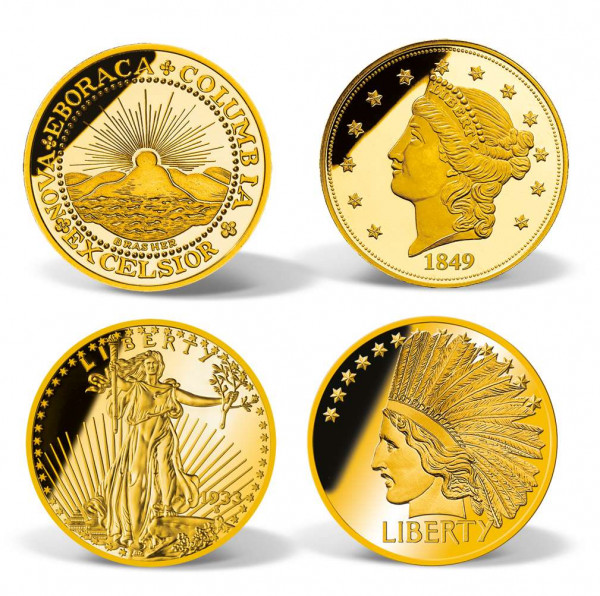 This limited-edition set features 4 solid 14k gold reproductions of the most valuable gold coins in American History. To own the original coins featured in this set would cost $50 Million! Our exclusive set of solid 14k gold replicas is the only way to own these unattainable treasures.

1849 Liberty Head Double Eagle Pattern The first gold Double Eagle ever minted in the U.S. was minted in 1849. However, only one coin was produced as a pattern. That sole existing specimen now resides in the Smithsonian Institution and cannot be sold, but experts estimate its value at $20 million.

1933 Saint-Gaudens Walking Liberty Double Eagle When FDR banned private ownership of gold in 1933, only a handful of Gold Double Eagles escaped the melting pot.Two were given to the Smithsonian and a handful were secreted away by the Mint's chief cashier. One missing coin resurfaced at auction in 2002 where it sold for a record $7.6 Million!

1787 Brasher Doubloon Before there was a U.S. Mint, private minter, Ephraim Brasher produced a limited number of gold coins for New York. Known as doubloons, each hand-stamped coin bore the maker's initials somewhere on the reverse. With only 7 of these historic treasures known to exist, it is understandable why the only existing breast-initialed specimen sold in 2011 for an astounding $7.4 Million!